Check our FAQ on What's Open and confirm business hours before arriving.
Visit Saratoga.com For Everything Saratoga
Enter Giveaways Advertise
Home  »  Fun Stuff  »  The High Rock Spring Has Been Revived!

The High Rock Spring which has sat stagnant for over one hundred years, is bubbling up once more — a befitting part of the city’s ongoing Centennial Celebration. 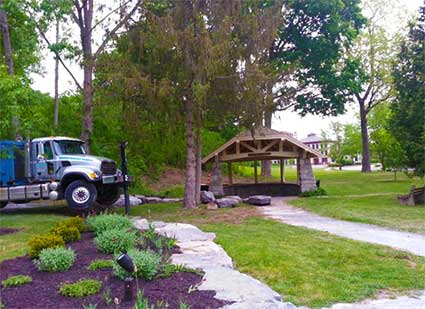 Saratoga, “Queen of the Spas”, is famous for its healing waters, attracting visitors throughout the 19th and 20th centuries who ‘took the cure‘ and enjoyed the many amenities that developed in this thriving resort town. Since 1900 however, natural gas companies, who bottled only the springs’ carbon dioxide, reduced the number of active springs from over 100 to just 17 that we can still enjoy today.

The High Rock Spring’s legend dates back even further than the 1800s. As early as the 1300s, Native Americans would visit the location to gain strength from the medicinal spring. In the 1750s, an ailing French officer was brought there and in 1771, Sir William Johnson, wounded in the Battle of Lake George, was carried there by members of the Mohawk tribe. It was this visit, and subsequent recovery, that carried the area’s reputation for healing waters beyond the Native American population.

Located on Maple Avenue across from Olde Bryan Inn, this legendary spring stopped flowing in 1911 and over time, had become a hardened lump of mineral deposits forming a cone. Despite its history, it did not seem to garner much attention until Mayor Joanne Yepsen called for action while planning the city’s Centennial Celebration last year.

The spring was worked on for over a year, and is now re-piped and ready to be enjoyed once more. The new drinking fountain’s water will come from a constantly flowing line, making it safe to drink, and bypassing the mineral-hardened cone where the water sits stagnant in a small pool.

Reviving the High Rock Spring was a collaborative project by Public Works Commissioner Anthony “Skip” Scirocco, Mike Ingersoll of the L.A. Group, Hawk Drilling Co., and the Centennial Committee, including a High Rock Spring subgroup consisting of Charlie Kuenzel, a retired school teacher who now owns Saratoga Tours, Jamie Parillo, executive director of the Saratoga Springs History Museum, and Steve Sullivan, president of Olde Bryan Inn and Longfellows Hotel and Restaurant.
Charlie Kuenzel, a member of the Saratoga’s Centennial Committee, told the Saratogian, “I’m amazed and happy about how everyone collaborated to get the spring flowing again.”
On September 12th, the spring will be unveiled to the
public and rededicated. In addition to the spring itself, there will
also be interpretive plaques that will tell the history and geology of
the area.
We are so excited to try a sip from Saratoga’s 18th spring!
Source:
Saratogian
History of Olde Bryan Inn