With a new season rolling in to Saratoga Springs, there also comes new food news! From fall specials and seasonal menus to a Saratoga-themed restaurant in a different state — we’ve rounded up the latest food world happenings. 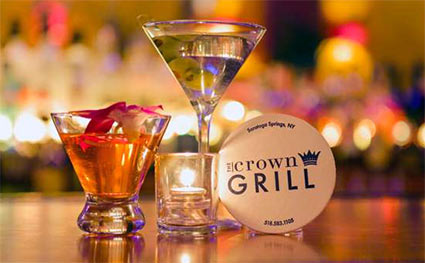 Fall Specials at The Crown Grill

After a busy summer season at The Crown Grill, the eatery is gearing up for fall. Their new menu will feature great steaks, fresh pastas and new seasonal offerings. There are also great promotions happening such as a complimentary appetizer and a house-made dessert of your choice with the purchase of two full price dinner entrees Monday through Thursday. In the mood for live music? Enjoy live jazz and $5 signature cocktails with complimentary bar snacks on Fridays from 7:00 PM to 10:00 PM. Also, on Sundays, a “Wine-Down” Supper will be available featuring a three-course prix fixe menu for $19, plus half priced bottles of select wines.
Cupcakes For a Cause
Fresh Market will host its third annual Cupcakes For A Cause event in support of No Kid Hungry. This September, purchase a paper cupcake at the checkout counter with a minimum $1 donation to show support for this important cause. Also, on Saturday, September 26 and Sunday, September 27, Fresh Market will host a cupcake decorating event from 1:00 PM to 6:00 PM. For a $3 donation, shoppers can decorate and take home a delicious cupcake from the in-store bakery!
BurgerFi’s Second Location
BurgerFi recently opened in Latham this past August. However, a Saratoga Springs location is also expected to open in early 2016. The franchise was brought to the area by the owners of Lia Auto Group and Capital Region restaurant mogul, Angelo Mazzone. The menu features angus beef burgers, hot dogs, gourmet hand-cut fries, custard, craft beer and wine.
Saratoga-Themed Restaurant
A Spa City native brought his love of his hometown to Boston this summer. Owner, Dylan Welsh, opened Worden Hall, a Saratoga-themed modern American restaurant during Travers weekend. The restaurant name comes from the historic Saratoga Springs Worden Hall, a guest house from the 19th century that was located on the corner of Broadway and Division Street. Welsh told the Saratogian, “Celebrities, jockeys, trainers — everyone used to love going there.”
Welsh got a plethora of history and information from 95-year-old Saratoga resident, Minnie Bolster. As a gift, Bolster gave Welsh an original coaster from the Worden Hotel, which is now inlaid on the corner of the bar. Additional décor includes a large mural of the Saratoga Race Course, as well as other images of Saratoga Springs. If you’re ever in Beantown and missing Saratoga, give Worden Hall a try!
Post Time Deli and Catering Welcomes New Owners
Always popular and loved by many, the Post Time Deli and Catering is now under new ownership. Husband and wife, Bernard and Suzanne Pratt, along with their son, Thomas MacDonald, took over ownership back in May. The Pratts are long time fans of the establishment and are looking forward to working hard. In addition to their famous breakfast sandwiches, Post Time also offers catering for a wide variety of occasions.
Sources:
Albany Business Review – Restaurants that opened in summer 2015
Saratogian
Saratoga Business Journal