If you watched the Travers Stakes this past Saturday, you know how incredible and exciting the race was. Keen Ice pulled through and defeated Triple Crown champion, American Pharoah, in what seemed like the last possible seconds before the finish line.

We had the opportunity to speak with Steven Bouchey, one of Keen Ice’s owners about the big win, his horse’s future and what he loves about Saratoga. Take a look! 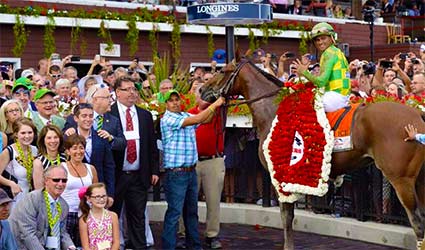 First of all, congratulations on Keen Ice’s big win this past weekend! That’s incredible.

Thank you, it truly was.
I know you’re from the area. Would you mind telling us about yourself and how you got into horse racing?
I got into horse racing living locally, growing up in Troy. My son, Ryan, lives in Saratoga, so we have always gone to the track and have always been intrigued by the sport of horse racing.
A couple of years ago, we were invited to Lexington, Kentucky to see Keeneland and the people we met, how we were treated, what we learned… It was just overwhelming in a very positive way. Through the relationships and connections we made via Keeneland and also a good friend of mine, Christophe Clement, we were able to do some due diligence.
A year ago, we became horse enthusiasts with a couple investments and partnerships. We were very fortunate in our first year to have a horse who ran in the Kentucky Derby, the Belmont Stakes, the Haskell Invitational and then won the Travers.
Since you are local, I’m sure you’ve been coming to Saratoga for awhile now during track season. What did it feel like to win the Travers on your home turf?
Now don’t take this the wrong way… To win the Derby and the Belmont would be magnificent, but to beat a Triple Crown winner in front of your hometown crowd just can’t be beat. To win a Travers by beating a Triple Crown winner hasn’t been done in 42 years since Onion beat Secretariat [at the Whitney.]
Do you think that the replay of Keen Ice’s win will be replayed to the extent of Onion’s over Secretariat?
I would love to think so. We haven’t had a Triple Crown winner in 37 years. In Saratoga, when you think this was the fifth Triple Crown winner that has raced, and the only one that won was back in 1941, saying Saratoga is the “graveyard of champions” is truly an accurate statement. Travers Day has confirmed that once again. It’s a race that has been talked about and will be talked about for a long time hopefully!
I think we need to remember that the Zayats did horse racing a wonderful thing by allowing everyone to see and love American Pharoah. American Pharoah is a special horse, we haven’t had a Triple Crown winner in so long. To think over the negativity with California Chrome spurred by the owners last year, and this year to have the Zayats want to have American Pharoah be seen… They were so gracious and generous. I think they have done for horse racing what nobody else has done, not since the 1970s.
That’s what makes having a partial interest in Keen Ice even more exciting. I knew we were going to be part of history, I didn’t know we would make history. 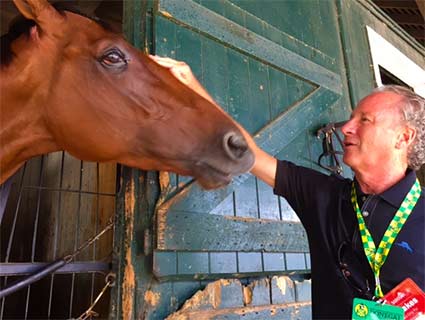 Can you walk us through what it was like watching Keen Ice pull through to the front during the Travers? I can only imagine how amazing that feeling was.
I was actually standing in front of the Zayat’s box all by myself because I was so nervous. I couldn’t really see the TV or hear the announcer so I was just watching the race play out.
As the horses came around at the top of the turn, I watched American Pharoah and Frosted battle it out. Frosted took the lead, then American Pharoah retook the lead and I thought to myself, “Wow, this is going to be some horse race.” Then, on the outside, I saw a horse and the colors were muted because he had so much dirt on him, and I didn’t realize it was Keen Ice!
As I watched the race play out, I saw that burst of energy in Keen Ice, he turbo charged through the finish line. I stood there in awe and it took me a few moments to realize that it was truly history in the making.
Can you tell us more about the Donegal Racing partnership? What can we expect from your horses in the future, especially Keen Ice?
Donegal Racing was formed right at the beginning of the country’s financial crisis. Our managing partner went down to Keeneland thinking he would be able to buy one horse, maybe two. Because of the financial collapse, he was able to buy eight horses.
Donegal is special and unusual in the business. Every partnership is named Derby Dreams 1 -7. Keen Ice is #6. There is actually a formula used in selecting a horse that looks at DNA amongst other factors. Remember, there are 30,000 yearlings born each year and only 20 make it to the Kentucky Derby. So, they look at this formula where they are only interested in horses that meet their criteria that they have, and will whittle it down from there. They won’t spend a dollar more on a horse that meets their criteria.
Jerry Crawford has done a phenomenal job at managing these partnerships. He is out of Iowa, and loves horse racing. He is a pretty dynamic gentleman in his own right. Donegal Racing has had three horses in the last six Kentucky Derby’s and that is also pretty special in its own right. There are ten horses, the more famous horses are Puca, Danny Boys and Keen Ice, who have all run in significant races.
Keen Ice is now in Louisville, and I think his next stop will be at the Breeder’s Cup as long as he’s healthy. We just want the horses and jockeys to both cross the finish line safely. They need time to rest up and be healthy.
Lastly, Keen Ice has raced at Churchhill Downs, Belmont, Monmouth… What do you think sets Saratoga apart from these legendary race tracks?
Saratoga is different. People may say it’s the best horse racing in the country and possibly, in the entire world. When you think of the quality of races that we have, NYRA did a great job, especially with all they did this past season, it’s incredible.
Saratoga is such a special place, and people really want to see it and take part in it. No one wants to see the grandstand messed with because it’s truly something special. Very few tracks in the country have the feel that Saratoga has.