NYRA’s Reorganization Board of Directors heard a comprehensive report at the most recent meeting in Manhattan. The board recapped the record 2015 Saratoga meet and outlined the strong financial performance and results. Get the scoop: 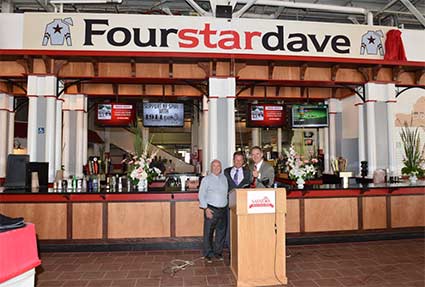 CEO and President, Christopher Kay, outlined the final results for the 147th meet at the Saratoga Race Course, which came to a close on Monday, September 7th.

The record total NYRA handle of $656,121,664, equated to a 14.1 percent increase over 2014. This figure shattered the previous high of $590,187,876, set in 2012. The record on-track handle of $157,647,599, resulted in a 4.8 percent increase over 2014. This figure also beat the previous, on-track high of $150,637,998 in 2012.
According to Kay, NYRA recorded a 13.8 percent increase in revenue derived from dining, concessions and merchandise throughout the 2015 Saratoga meet. These strong revenue gains corresponded with an overall increase in paid attendance. Total paid attendance for the 2015 Saratoga meet was $1,065,625.
“Over the past two years, our efforts to enhance the overall experience and improve the quality of racing are clearly resonating with our horseplayers, our fans and with their families,” said Kay in a press release.

In 2015, NYRA averaged $16,403,042 in race handle on the Saratoga product, becoming the first non-Breeders’ Cup race meet in America to average more than $16 million in daily race handle on its own product. Saratoga is the only North American race meet which runs six days a week, making this achievement even more incredible.

Focusing on the overall experience enjoyed by horseplayers, fans and their families at the Spa, Kay stated that capital improvements and facility enhancements at Saratoga Race Course since 2013 have supported corresponding boosts in interest, attendance and handle for the 2015 season. These additions and upgrades included: