Looking for something to do this weekend in Saratoga? Look no further! We’ve rounded up our top five picks for events to celebrate fall. From international food festivals to spooky scare fairs, we have you covered. Take a look: 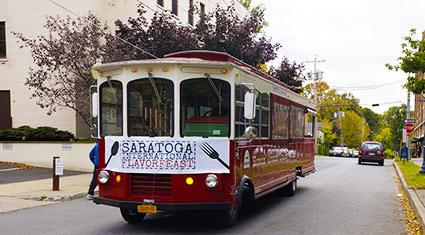 It’s time to get in the Halloween spirit! If you’re up for a superbly spooky evening, head over to the Saratoga County Fairgrounds on Friday evening for the Saratoga Scare Fair! Noted as one of the scariest haunts in the Capital Region, keep in mind that small children and the faint of heart may not want to attend!
Saratoga International Flavorfeast
Take your tastebuds on a culinary journey at the Saratoga International Flavorfeast on Saturday. Pick up your “passport-map” and try $1 samples from your favorite Saratoga eateries. You don’t want to miss out on this fun event!
Fall Festival at Olde Saratoga Farms
Swing by Olde Saratoga Farms for a fun time with the whole family at the Fall Festival on Saturday! Take a hay ride, bounce on the bounce houses and find your way through the hay maze.
‘The Way We Were’ Car Show
The Ballston Spa Business and Professional Association will once again host the 13th Annual ‘The Way We Were’ Car Show on Sunday. Front Street will be closed to showcase hundreds of classic and specialty cars and trucks. There will be food, music and vendors, as well!
Family Day at The Saratoga Winery
The Saratoga Winery will celebrate the third day of their Winestock celebration weekend! Sunday is Family Day and will feature several fun activities such as pumpkin painting! There will also be a gourmet food truck, a live performance by the Rich Clements Band and more.
Take a look at the full list of weekend happenings in Saratoga!