For 20 years, First Night Saratoga has been the go-to event for families ringing in the new year. For 2016, Saratoga Arts has brought in the best from all over the spectrum of arts and they are excited to bring you the most spectacular First Night Saratoga event the region has ever seen. 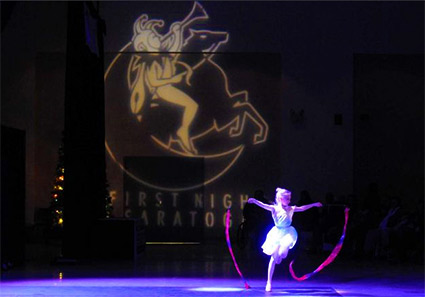 In between, Saratoga Arts packed downtown full of live music, dance, comedy, magic, and even a few psychics!
Where else can you see dozens of different music, dance, comedy, theater, and performance artists in one night for the ridiculously low price of $15? Nowhere but First Night Saratoga!
Free bus and Wilton Mall Shuttle
CDTA will offer special Saratoga First Night transportation service on New Year’s Eve. Attendees who show First Night buttons ride for free on all regular Saratoga bus routes and the two special shuttle routes from 4pm through 1am.
New this year, CDTA will provide shuttle service from the Wilton Mall to Saratoga Arts at 5:30pm & 8:45pm and from Saratoga Arts to the Wilton Mall at 8:30pm and 12:30am after the fireworks.GE Kids in Free Days
Both Saratoga Arts and GE share the goal of providing a variety of outstanding, family-oriented community events.
Since First Night Saratoga is an alcohol-free, family-friendly event, it is a natural fit with GE’s Kids In Free Days program which offers free admission for kids 12 and under with a paying adult at special events across New York’s Capital Region.
SPAC’s 50th Anniversary First Night Fireworks
will light up the sky with a dazzling firework finale to 2015 at midnight in Congress Park.
Don’t miss out on what’s sure to be a spectacular way to ring in the New Year. Buy your button today for Saratoga First Night!