We’ve rounded up some the latest food headlines from around Spa City. From new bars opening up to local favorites changing locations, we have you covered. Check it out: 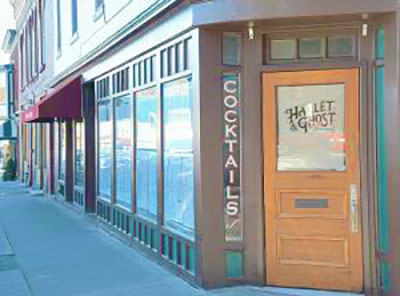 A new spot on Caroline Street will open this month that is sure to stand out. Hamlet & Ghost will feature high-quality, custom-crafted drinks and small plates in an industrial-chic atmosphere. The establishment is a collaborative effort between three hospitality vets: Brendan Dillon (formerly of Max London’s), Chall Gray and Alex Straus. Approximately 50 people at a time can be hosted between three different seating areas in the space including a European-style banquette in the front, a classic bar counter in the middle and an intimate area with small tables in the back. Dillon told the Saratoga Business Journal, “We wanted to create a space where everyone can enjoy a well-crafted cocktail in a relaxed atmosphere, without feeling crowded or out of place.”

Maestro’s Will Be Back

A Saratoga favorite, Maestro’s will return at a different location. The eatery’s new home will be in the newly refurbished clubhouse at McGregor Links Country Club, just four miles from downtown Saratoga Springs. Maestro’s at McGregor will offer the same great service and signature dishes that visitors have enjoyed over the years. The restaurant will be open to club members in March, and open to the general public by mid-April according to the Saratogian.

World-renowned Chef Gray Kunz has announced he is behind Salt & Char, the high-end steakhouse that will be replacing Maestro’s Broadway location. Chef Kunz is a globally acclaimed chef and operator with a wealth of culinary knowledge. Chef Kunz stated in a press release, “Our goal is to celebrate the best of the Hudson Valley by featuring the talented local producers, farmers and artisans. Through Salt & Char’s food and beverages, ambiance and warm, welcoming service, our guests will get an introduction to what I love about the area and especially Saratoga Springs.” Salt & Char is expected to open in March.

Capriccio Saratoga owner Jim Rua has announced that he will be closing the eatery after January 1. Former Maestro’s Chef, Danny Petrosino will take over the Henry Street establishment as Osteria Danny at the beginning of January. Petrosino stated in a press release, “We’ll be offering killer homemade pasta dishes and not your average pizzas.”

Upscale restaurant chain, Morton’s, will make its area debut at the Saratoga Casino & Raceway‘s new hotel in June. The steakhouse will seat 160 guests with private dining space for parties of up to 32, as well as a lobby bar.