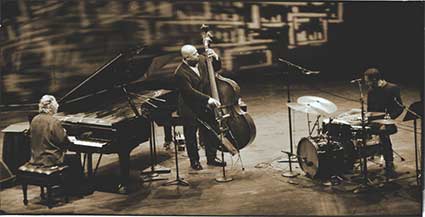 “We are proud to welcome three 2015 Grammy Award winners to our 39th Annual Jazz Festival,” said Marcia J. White, SPAC’s President and Executive Director, in a press release. “We are delighted to bring our audiences the best of the best in the industry for 2 days and 2 stages of peerless music making. We look forward to a spectacular 2016 line-up.”

In his Freihofer’s Saratoga Jazz Festival debut, Jon Cleary will perform the rich music from his newest album GoGo Juice, for which he won a 2015 Grammy Award. While he’s known for his considerable skills as a tunesmith, he is equally renowned around the world as an accomplished keyboardist, guitarist, and vocalist. Cleary’s sound incorporates such influences as ’70s soul, gospel music, funk, Afro-Caribbean rhythms and more.

Five-time GRAMMY Award winner, jazz bassist Christian McBride will also be in attendance in Saratoga. The Philadelphia native has become one of the most requested, most recorded, and most respected figures in the music world today. At SPAC, he will perform as part of Triolgy alongside Chick Corea and Brian Blade.

Also featured at the 58th annual GRAMMYs was 12-year-old Indonesian piano prodigy Joey Alexander, who performed and was nominated for Best Improvised Jazz Solo and Best Jazz Instrumental Album. At SPAC, Alexander will perform a selection of songs from his album My Favorite Things on his 13th Birthday.

Tickets are available online at SPAC’s website. We can’t wait to for the Freihofer’s Saratoga Jazz Festival!