Full-season ticket plans and season admission passes went on sale this week for Saratoga Race Course, and yesterday, we were notified that initial sales have been brisk! With your purchase, you reap the benefits of an expanded Perks program with exclusive offers. These include the guarantee of a premium Saratoga giveaway and special discounts at more than 20 retail, restaurant and professional services locations in downtown Saratoga Springs. 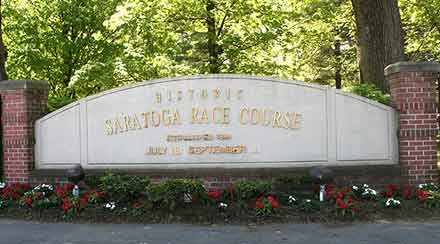 “While pricing remains the same as last year, the value of a season pass has dramatically increased with the addition of discounts to a wide variety of popular retail shops, restaurants, entertainment venues and sports and winter resort destinations,” said New York Racing Association Senior Vice President and Chief Experience Officer Lynn LaRocca in a press release.

The Perks program guarantees a premium giveaway item on the day of the giveaway, so long as the season pass or season ticket plan holder is in attendance at the Saratoga Race Course and redeems the giveaway item by 3 p.m. You can claim your giveaway as soon as the gates open to the general public.

Discount Savings Off The Track

A growing list of retail, restaurant and professional services are offering a 10 percent savings with an activated season pass beginning June 1, 2016 through March 1, 2017.

In addition, there are discounts to additional New York Racing Association (NYRA) partners including:

Benefits On The Track

The website www.SaratogaSeasonPerks.com will be continually updated with new participating organizations.

The 2016 summer meet at Saratoga Race Course, which will feature 69 stakes worth a record $18.725 million, begins on Friday, July 22 and concludes on Labor Day, Monday, September 5. See you at the track this summer!