The plan to build a multi-story parking garage on High Rock Ave. in downtown Saratoga Springs has not been easy for the Saratoga Springs City Center Authority. Although the City Council recently approved of a 25-year land lease, the plan is now involved in a lawsuit over the validity of the council’s vote. 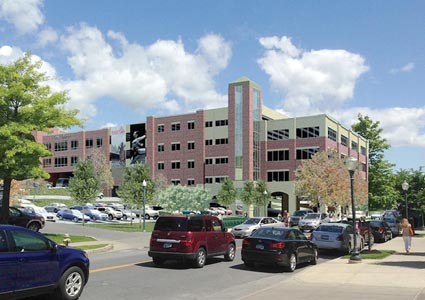 The Saratoga City Center’s long term plan for an existing parking lot on High Rock Ave. is to transform it into a five story, 484 space parking garage. The city-owned property is next to the City Center and is currently a free, 272 space parking lot. For $10.2 million, the City Center hopes to build this garage and provide additional parking for convention attendees and other downtown visitors.

We reported on this plan back in September 2015 during its earlier stages. At the time, the plan to subdivide the High Rock Ave. parking lot had been approved by the Saratoga Planning Board. More specifically, two-thirds of the 2.6 acre parking lot would be used for the parking garage, and the other one-third would remain a surface lot. Over the past few months, the parking garage plan has faced criticism from members of the community. Since then, the plan has undergone more approval processes and lawsuits.
The details of the lease plan were laid out in March 2016. The City Center Authority proposed building the garage on 1.6 acres of the 2.6 acre lot. Cash reserves and a $6 million bond would fund the project. Furthermore, the parking garage would also become the first paid parking in Saratoga at $5 for day parking. As a part of the 25-year lease, the city would be paid $50,000 a year by the City Center, plus a higher percentage each following year.
The City Center wasn’t the only business interested in the parking lot property, though. Two private bidders suggested using the lot for a multi-use building, including parking spaces, offices, housing, and shops. Ultimately, the city determined the City Center’s project would provide the desired amount of parking spaces and provide the greatest benefit to downtown Saratoga Springs.
Although the plan has been approved by the City Council, two lawsuits are in progress:
1. The first lawsuit was issued this past September by David and Dianne Pedinotti, owners of the Mouzon House on York Street, near the 2.6 acre lot. According to the Times Union, they accused City Council members of “spot zoning.” The lawsuit states the existing law wouldn’t allow the proposed parking garage to block sunlight to the Mouzon House’s solar panels, but the council’s amendments changed that. The Pedinottis believe the council’s vote to change the solar access law should be invalidated.
On the other side of the lawsuit, City Attorney Vincent DeLeonardis has his own argument. A Times Union article reported why DeLeonardis believes the lawsuit should be dismissed. He stated that the Pedinottis knew the property could become a “multi-layer facility” ten years ago, and they had no problem then; the Pedinottis also put the solar panels up after the proposition was announced. DeLeonardis argued that the council’s amendments were in response to the city’s Comprehensive Plan for “high-density development downtown.”
2. The second lawsuit was issued by the Pedinottis and others after the recent City Council lease approval. The Post Star reported on two reasons for this lawsuit. One, the plan lacks the support of Mayor Joanne Yepsen and Accounts Commissioner John Franck, which the lawsuit states is necessary. Two, the lawsuit argues that a public land lease needs a three-fourths majority council approval, and it only received a 3-2 vote.
Those in favor of the parking garage believe it will have a positive impact on the downtown area. The Albany Business Journal revealed that the City Center hosted over “154 events last year,” and it drew “more than 150,000 people to the city.” A new parking garage would better accommodate visitors and locals.
For now, while both lawsuits are pending, the City Center is at work on finalizing the design of the parking garage with the City’s Design Review Commission.
Would you make use of the paid parking garage downtown at the City Center?
Sources: