The Zim Smith Trail is a nine-mile recreation trail that stretches from Ballston Spa all the way to Halfmoon. A recent land purchase proposal by Saratoga County would extend this popular trail from Halfmoon to Mechanicville. 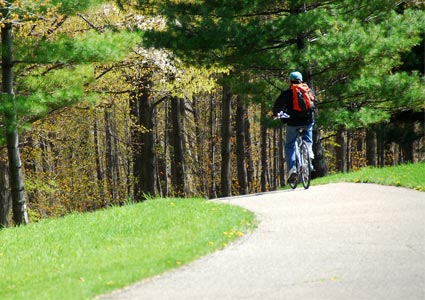 The Zim Smith Trail is named after local resident Zim Smith, who, in the 1980s, mapped out his idea for an interconnected county trails system. Inspired by his idea, Saratoga County constructed the multi-use trail that goes from Ballston Spa, through Malta and Round Lake, and ends in Halfmoon. The trail was officially opened in late 2010.

A few years later in 2012, the Zim Smith Trail was named a national recreation trail by the U.S. Department of Interior and National Park Service. The nationwide designation is given to trails and trail systems that provide recreational opportunities to local communities.

In its recent proposal, Saratoga County plans to buy 4,600 linear feet of land along the Halfmoon railroad yard and convert it into another section of trail. The proposed trail extension would start at the railroad yard’s southern edge and end at Elizabeth Street in Mechanicville. To keep it off-road, the extension would cross some private property, including a golf course.

The estimated cost of the extension is $3.7 million, but that is subject to change. $1.3 million is already set aside for the trail, and another $2 million will likely come from federal funding. The county is working to acquire the rest of the project’s funds now.

Saratoga’s Economic Development Committee approved of the land purchase plan with Pan Am Southern LLC to purchase a piece of their railroad yard for no more than $45,000. The land proposition was again approved during a Saratoga Springs city council meeting, so the project will likely go through its final planning stages later this year. The county hopes to begin construction of the trail in spring of 2017.

What do you think about extending the Zim Smith Trail into Mechanicville?
Sources: