Both houses of the New York State Legislature have adopted a resolution commemorating the 50th anniversary of Saratoga Performing Arts Center (SPAC). The resolution recognizes SPAC’s remarkable five-decade history, as well as the role New York State played in founding the venue in the 1960s. 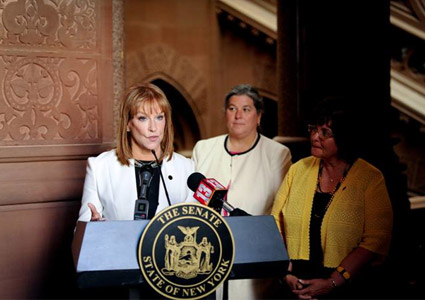 Photo provided by SPAC
The first performance in SPAC’s storied history took place on June 8,1966 when the New York City Ballet presented George Balanchine’s A Midsummer Night’s Dream. “That evening was the start of what would become five extraordinary decades of world-class music and dance that would enrich the lives of over 20 million people,” said Marcia J. White, SPAC’s President and Executive Director, in a statement.
Since the beginning, New York State and the Capital Region have been supportive of SPAC. The State provided not only the Saratoga Spa State Park location, but also funded site preparation, parking, and walkways to get SPAC up and running. Support continues today through partnership on capital improvements and advocacy for arts and culture.
The resolution was sponsored in the Senate by Kathleen Marchione (43rd S.D.) and in the Assembly by Carrie Woerner (113th A.D.).
“SPAC is a beloved cultural and architectural treasure, not only for Saratoga, but for our Capital Region and entire state,” Senator Marchione said in a statement. “I’m proud to partner with Assemblywoman Carrie Woerner to honor SPAC with a Legislative Resolution recognizing and celebrating SPAC’s 50th anniversary.”
“Saratoga is one of the most economically and culturally vibrant communities in the northeast,” Assemblywoman Woerner added. “Saratoga Performing Arts Center, which draws hundreds of thousands of people to our area each summer and enriches our artistic landscape immeasurably, is an integral part of that success.”
When SPAC opened in 1966, it was the first venue of its kind to host two world-class performing arts companies: New York Ballet and The Philadelphia Orchestra. Today, the ballet and orchestra are at the center of a robust schedule of events, including the Chamber Music Society of Lincoln Center, the Freihofer’s Saratoga Jazz Festival, Live Nation’s concert series, and the annual Saratoga Wine and Food Festival.
If you haven’t yet secured your tickets for SPAC’s world-class programming and events during this special 50th anniversary season, be sure to do so today!