The next time you feel like relaxing on one of Saratoga Springs’ sidewalks, think again! In a recent vote, Saratoga Springs approved of a ban against sitting and lying on any sidewalk in the city. 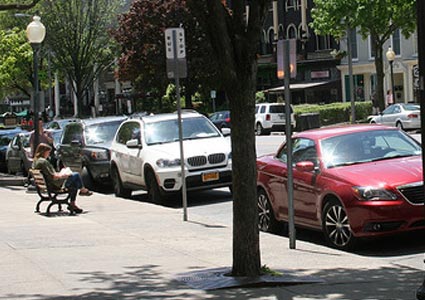 During a public meeting on June 7, the proposed ban on sitting and lying on the city’s sidewalks was discussed long into the night. In a 4-1 vote, only Mayor Joanne Yepsen disapproved of the ban because she thought the fines were too severe. For some people at the meeting, the ban unfairly criminalizes the homeless, but for others, sidewalk sitting was a hazard that needed to be addressed.

News10 reported on the meeting and a few of the public speakers. One of them, Darlene McGraw, was once homeless for a month. She believes the ban isn’t a solution to homelessness, and it will only create more problems. According to News10, McGraw said, “We need to think of it as a whole, huge concern all over the place,” so for her, the city should focus on helping rather than fining the homeless.

Although there are homeless shelters in Saratoga, such as the housing provided by Shelters of Saratoga (SOS), there are upcoming changes. SOS’s winter program, Code Blue Saratoga, will be inactive because the Salvation Army won’t renew its property contract for next winter. The Code Blue Salvation Army shelter was dedicated to helping the homeless during freezing temperatures; this was in accordance with Gov. Cuomo’s mandate for shelters to take in homeless when the temperature drops below freezing.

Despite the ongoing homelessness and homeless shelter issues in Saratoga Springs, the sidewalk ban was presented as a protective measure for the community. “We’re trying to make sure that people aren’t tripping over people,” Public Safety Commissioner Chris Mathiesen said in a News10 article. He emphasized that the ban targets the issue of sitting and lying on the sidewalk and not particular people.

Sidewalk bans aren’t new; over 100 cities had made it a crime to sit on a sidewalk by the end of 2014. However, the effect of the ban on the homeless has been addressed elsewhere. In Hawaii, for example, the sidewalk ban has resulted in fewer homeless people on the streets, but in response to the ban, cities have also renewed their focus on homeless outreach programs.

When the ban in Saratoga Springs goes into effect next week, there will be warnings and fines for anyone sitting or lying on the sidewalk. A warning will be given first, followed by a fine of up to $100, and then a second offense could carry a fine of $500 or 10 days in jail. Future offenses could result in a misdemeanor charge.

There will be some exceptions as well, including: sitting on a bench, watching a parade, or if there’s a medical emergency.

How do you feel about the approval of the sidewalk ban in Saratoga Springs?