The community booth lineup has been announced by NYRA for the 2016 Saratoga Race Track season, with more than 40 area nonprofits and school organizations participating. 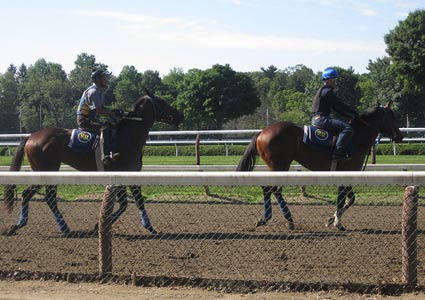 The majority of the community groups at the track this year will be found at the Community Outreach Booth, which is located next to the Jockey Silks Room and across from the Saratoga Walk of Fame.

The Community Outreach Booth will host one organization a day. Guests visiting the track will have the opportunity to check out the groups at this booth, learning more about our area’s various nonprofits and the important work they do.

“The New York Racing Association is honored to welcome a diverse array of nonprofit organizations from across the region to Saratoga Race Course to help further their marketing, outreach, and fundraising efforts,” Vanessa Rodriguez, Manager of Community Affairs for NYRA, said in a statement. “We recognize how important these organizations are to those they serve and are pleased to assist them in building a stronger community.”

Groups at the booth will also be hosting fundraising initiatives, which can include autograph sessions, live music, arts and crafts, and other activities.
One of the organizations you can expect to see at the track is Saratoga Hospital: “We’ll be promoting our Cancer Patient Fund this year, which provides resources for patients to cover travel expenses, pay for wigs, or purchase special equipment not covered by insurance,” Amy Raimo, Vice President of Community Engagement for Saratoga Hospital, said in a statement.
In addition to the Community Outreach Booth, seven area schools will be in attendance at Berkshire Bank Family Mondays throughout the season. The schools will be hosting a specific activity with the suggestion of a donation; NYRA and Berkshire Bank will be providing matching grants. All other activities during Berkshire Bank Mondays will be free of charge.
The full schedule for who you can expect to see at the Community Outreach Booth for the 2016 racing season is as follows:
On Berkshire Bank Mondays, the following schools and PTAs can be found at the Saratoga Pavilion:
The entirety of the racing season runs from Friday, July 22nd, to Labor Day, Monday, September 5th.