Saratoga local Steven Brundage has gone from performing on the streets and at community events in the Capital Region to wowing the entire country and beyond on America’s Got Talent.

We sat down and chatted with the 25-year-old magician, and found out how he became a professional performer, and what’s it’s like to now get recognized on the street. 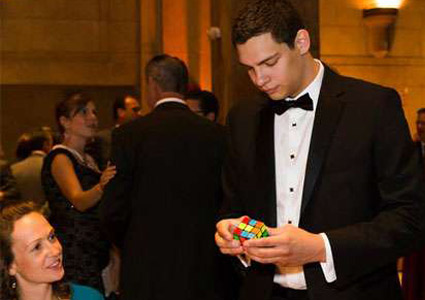 Brundage’s career really started taking off about a year and a half ago prior to his first appearance on AGT, which aired on Tuesday.

In 2014, he got out of a speeding ticket by performing a trick with a Rubik’s cube, his signature act. He had one of the police officers record him solving a Rubik’s cube in 20 seconds – and then in one second. The video became a YouTube sensation seemingly overnight.
Since then, Brundage has appeared on shows like The Steve Harvey Show and Good Morning America – he even fooled famous magician duo Penn and Teller on the show Fool Us before making his way to AGT.
Brundage has been interested in magic since he was a kid, but it wasn’t until he saw David Blaine perform when he was in 8th or 9th grade that he began to take the craft seriously.
“I had no idea how he did what he did,” Brundage told us. “I got interested in learning how he did his tricks. Once I learned some of his tricks I started doing them, and learned a bit more about performing, and I got hooked right away.”
As for how Brundage ended up concentrating on the Rubik’s cube – that wasn’t always a trick. It was more of a side interest that he eventually merged into his magic routine.
“Growing up I learned how to solve it at 13 and I got faster and faster, averaging around 15 seconds,” Brundage said. “It wasn’t a trick – I just solved it fast. Over time, I saw the awesome reactions it got, so from there I started working on new tricks and developing ideas for it.”
On AGT, Brundage completely stunned judges Simon Cowell, Heidi Klum, Howie Mandel, and Mel B with his Rubik’s cube tricks – and, earned a standing ovation from the audience. You can check out the video here.
Not surprisingly, Brundage was voted to advance to the competition’s second round in Hollywood. Should he go on to win, he will receive $1 million and his own show in Las Vegas.
“It was a lot of filming,” Brundage told us about his time on AGT. “They probably condensed about 20 hours of footage down to about five minutes. There were a lot of ways they could have showed me. They could have covered me about 50 different ways, but they decided to cover me the way they did and I think it turned out awesome.”
When asked if he ever thinks about the possibility of his secrets being uncovered while performing Brundage responded, “It happens all the time. Every time I post something online there are 50 people who comment on how it’s done. A lot are wrong, some are right. Everyone thinks they’re a magician online.”
When Brundage watches other magicians perform sometimes he can figure out how their tricks are done.
“It’s a lot about learning one step at a time. After 13 years of doing this I have a vast library of knowledge,” he said. “A lot of times people are way beyond you so you do get fooled a lot, but sometimes you know things.”
With the YouTube video and his various television appearances, Brundage is making such a name for himself he’s being recognized on the street more and more.
On Wednesday he was in n. Fox Jewelers in Saratoga for only about 10 minutes, and a person recognized him. The day before, a man at a gas station saw him and cried out, “I read about you on Channel 13 news!”
But Brundage doesn’t just get recognized locally. “It’s at random places too,” he told us. “In California or in another country it happens – it’s pretty random, but it’s a very small world.”
When Brundage tells people who don’t know who he is that he’s a magician, occasionally he’s met with negative reactions.
“There are a lot of misconceptions,” he explained. “One of the biggest things when I started out was making a living. A lot of people were like, ‘Why don’t you get a real job?’ Even when I started booking bigger and bigger shows they’d say, ‘How can you make a living?’ I know some magicians that charge $15,000 per show – I don’t charge that much, but if you are you’re doing pretty good for yourself I would assume.”
Fortunately, most have a more uplifting response to Brundage’s career choice, with the majority being supportive and excited about how he’s following his passion. With his success skyrocketing just within the past week, we’re likely to see Brundage’s magic career only get bigger and better over time.
We’ll all certainly look forward to Brundage’s future television performances, but in the meantime, you can have a chance to see him live.
Brundage is scheduled to perform at The Saratoga Hilton on July 22nd at 8pm. Tickets can be purchased through his website, www.stevenbrundagemagic.com.