For the second year in a row, the New York Racing Association, Inc. (NYRA) has decided to cap attendance for Travers Day at 50,000 at the Saratoga Race Course. Reserved seating is already full for the 147th running of this historic event, so you need to get your general admission tickets now because they will sell out fast! 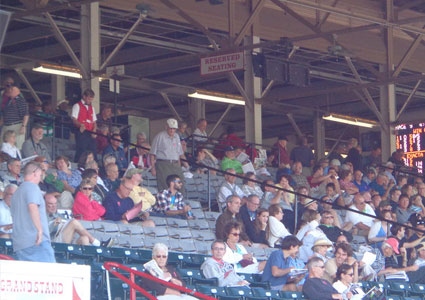 As of Thursday, August 18, 2016, all reserved seats, dining, and hospitality for the 2016 edition of the Travers are sold out. If you have a season pass, then you are already guaranteed admission on Travers Day. General admission tickets are available, but they will sell fast.

Tickets can be purchased in-person at the NYRA Box Office at the Saratoga Race Course, by phone at 1-844-NYRA-TIX, or online at Ticketmaster.com. There is a purchase limit of 8 general admission tickets per person.

In a press release, NYRA CEO and President Chris Kay said, “We strongly encourage fans to purchase tickets in advance for a spectacular day of racing at Saratoga with seven graded stakes, including an unparalleled six grade ones on the afternoon.”

Travers Weekend will start with New York Showcase Day on Friday, August 26, which will feature six stakes races for New York-breds. On Saturday, August 27, gates will open at 7:00AM for Travers Day, and the first post time will be at 11:35AM.

Get your tickets before they’re sold out!