W. Cothran “Cot” Campbell of Dogwood Stables and three-time Eclipse Award-winning trainer William “Bill” Mott will be introduced into the Saratoga Walk of Fame during the Red Jacket Ceremony on Friday, August 26th. This classic event will take place on the eve of one of the biggest days at the track, Travers, happening on August 27th. 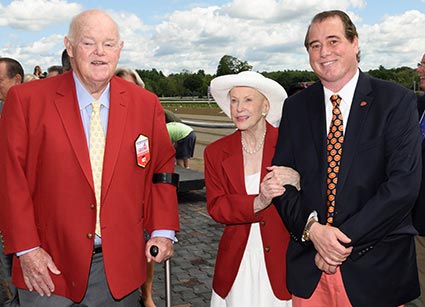 New this year at the Walk of Fame are two interactive displays allowing users to watch video replays from each of the track’s two prime races – the Travers and the Whitney – from as far back as 1973. This display is open to the public every day during the 2016 meet.

Plaques for 2016 honorees will be revealed during the Red Jacket Ceremony, when they will each also be presented with the traditional and iconic red jacket.
Campbell is known for launching syndicated racehorse ownership in 1969. In 1978, Campbell’s Dogwood Stable was brought into the limelight with Dominion’s victory in the Bernard Baruch. Others to sport the staple green and yellow colors of Campbell’s stable are Eclipse champion Storm Song, Preakness winner Summer Squall, and Belmont Stakes hero Palace Malice.
Mott is being recognized at the Walk of Fame for his amazing horse training skills. He came into fame in 1996 as the trainer of two-time Horse of the Year Cigar, who tied Citation’s mark of 16 straight wins, including an undefeated 10-race season in 1995. Mott has been presented with the Eclipse Award three times for his work as an Outstanding Trainer. He was introduced to the National Museum Racing and Hall of Fame at the age of 45, making him the youngest to receive that honor.
“Mr. Campbell and Mr. Mott are giants of the sport who have dedicated their lives to thoroughbred racing,” NYRA CEO and President Chris Kay said in a statement. “Their vision, passion, and commitment have made a tremendously positive impact on Saratoga and their influence will be felt for years to come.”
Past Red Jacket recipients have included Saratoga riders John Velazquez, Jerry Bailey, and Angel Cordero in 2013; Hall of Fame trainers D. Wayne Lukas and Allen Jerkens, and longtime NYRA race announcer Tom Durkin in 2014; and owners Ogden Mills “Dinny” Phipps and Marylou Whitney in 2015.