Although there’s no racing at the Saratoga Race Course on Dark Tuesdays, you can always find things to do in Saratoga Springs. On August 9, 16, and 23 – three Dark Tuesdays in August 2016 – there will be free lunchtime concerts at Saratoga Battlefield to brighten up your day! 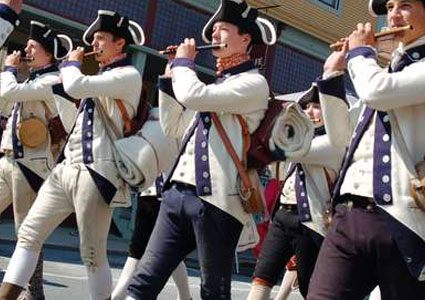 This fantastic series of concerts has been made possible thanks to a 2016 Community Arts Grant funded by the New York State Council on the Arts. Saratoga Arts has organized the free concerts, and the special program is sponsored by the Friends of Saratoga Battlefield.

The concert series will feature folk, traditional, and martial music, and each week’s program will be different. The lineup includes:
1. Rich Bala, August 9 – Learn about some of the most dramatic events from the Revolutionary War during folk singer Rich Bala’s musical history lesson. His performance will focus on New York State and the Hudson Valley.
2. Linda Russell, August 16 – Folk singer Linda Russell will give a musical tour through America’s National Parks. Her unique performance will touch upon history, culture, and preservation while she plays the guitar, penny whistle, and dulcimers.
3. Fort Ticonderoga Fife and Drum Corps, August 23 – Listen to the 18th century martial sounds of the Fort Ticonderoga Fife and Drum Corps. The concert will feature songs that were once played to hearten armies and give them direction during the Revolutionary War.
You can catch these concerts at Saratoga National Historic Park’s visitor center (Saratoga Battlefield). Each concert begins at noon, and it’s recommended to bring a lunch with you to enjoy. For more information about the concerts, you can call Saratoga National Historical Park at (518) 670-2985.