Visit Saratoga.com For Everything Saratoga
Enter Giveaways Advertise
Home  »  Events  »  Head To The Track On Saturday For The Whitney!

One of the biggest events at the Saratoga Race Track all season is happening this Saturday, August 6th – the Grade 1, $1.25 Million Whitney. 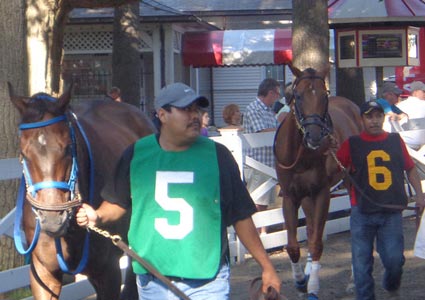 The 1 1/8 mile Whitney will headline the day of racing that includes five stakes as part of the Fasig-Tipton Festival of Racing.

The winning connections of the Whitney will be honored with a special custom-designed horse blanket made of hundreds of Marylou Whitney pink roses, along with a sterling silver, three-handled chalice trophy.

“The Whitney is a classic and iconic race, and a true highlight of the summer calendar at Saratoga,” NYRA CEO and President Chris Kay said in a statement. “The Whitney is also a race about community, demonstrated most prominently by its namesake family and the woman who carries on their legacy of philanthropy to this day, Mrs. Marylou Whitney. We look forward to honoring her on Saturday as we welcome fans to take part in the exciting Whitney Day tradition.”