Visit Saratoga.com For Everything Saratoga
Enter Giveaways Advertise
Home  »  Events  »  Head To The Saratoga Race Course For An Action-Packed Week #4!

Don’t miss out on the action! Here’s all the exciting happenings at the track this week – from Wednesday, August 10th, to Monday, August 15th. 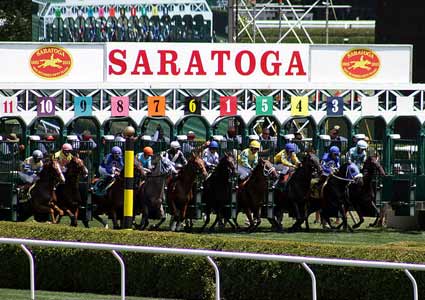 The $100,000 Birdstone for 3-year-olds and up on the dirt will be the featured race for this day.

Wednesday is also Irish-American Heritage Day – NYRA is honoring Irish culture with music, dancing, entertainment, and food from 11am to 5pm in the Saratoga Pavilion. Fans are encouraged to wear green in celebration, and to adorn their picnic tables with Irish decorations.

The Boland School of Irish Dance will be greeting guests at the grandstand and clubhouse entrances after the third race of the day. Fans can expect to see performances from An Clar School of Irish Dance throughout the day along with local musicians Don Kelley, Brothers Flynn, and Padraig Timoney.

The Albany Rebels Gaelic Football team will be coordinating demonstrations of the Irish sport from 1:10pm to 3:20pm at the Saratoga Pavilion.

The Irish food will include cooking demonstrations and food samplings at the Pavilion from local chefs, and food and drink will be available at concessions stands. Get ready for traditional Irish soda bread, Irish sausage wrapped in puff pastry, corned beef sandwiches, and more.

The Saratoga Challenge will kick off on Wednesday and will be a two-day event. One handicapper each day will have the chance to win entries at the Breeders’ Cup Betting Challenge and DRF/NTRA National Handicapping Championship. Registration is closed.

The community outreach booth on this day will be showcasing the Saratoga Performing Arts Center, as they celebrate their 50th anniversary season this year.

The featured race this day will be the NYSS Statue of Liberty for 3-year-old filly New York-breds going one mile on the grass for a purse of $100,000.

Thursday commemorates Fabulous Fillies Day, as NYRA celebrates women and their contributions to the industry with a fundraiser for The Breast Cancer Research Foundation through Play for P.I.N.K.

Expect to see pink bunting and flowers for breast cancer awareness. Fans are encouraged to wear pink and to consider making a contribution to the BCRF at various locations throughout the track.

As part of Fabulous Fillies Day there will be a Sizzling Hot Pink Saratoga Hat Luncheon at the Trail Pavilion with a champagne reception.

The Taste NY: Cider, Wine & Spirits will be going on Thursdays at the track with five varietal samples for $5 at the Saratoga Pavilion.

Floyd Warriors will be heading up the community outreach booth – they are an online organization committed to inspiring local individuals and their families who have been affected by cancer.

Race track attendees are encouraged to continue the fun after the day’s last race with Tequila Avion & Tacos Thursdays at The Post. Come check out the Latin music, dancing, and food and drink specials.

The fun continues into the evening as racing personality Andy Serling will be broadcasting live from The Parting Glass from 8pm to 9pm with “At the Post Live: Serling on Saratoga.”

The featured race on Friday is the $100,000 Tale of the Cat for 3-year-olds and up going six furlongs on the dirt.

There will be a “Belles of the Hall” viewing party in the race course backyard near Gate B from 10am to 1pm in celebration of the National Museum Racing Hall of Fame Induction Ceremony. A live stream of this sold-out ceremony will include photo opportunities with miniature horses resembling famous thoroughbreds, poster giveaways, and family-friendly activities.

Taste NY: Craft Beer is still happening on Fridays, where you can sample five craft beers for $5 at the Saratoga Pavilion.

The community outreach booth will be headed up by the Troy Boys & Girls Club, an organization who has been providing a safe place for youth through programs and activities since 1903.

Woodford Reserve Fridays at The Post will be happening each Friday, with a DJ, dancing, trivia contests, and cocktail samples after the last race of the day.

Saturday is Jockey Legends Day, featuring several of the most well known riders in the history of thoroughbred racing, including but not limited to the following Saratoga favorites: Angel Cordero Jr., Ramon Dominguez, and Richard Migliore. The jockeys will be signing autographs from 12pm to 1pm outside the Jockey Silks Room, with a suggested donation of $10 to the Permanently Disabled Jockeys Fund.

There will be a Low Roller Challenge presented by NYRA Bets, which will allow aspiring handicappers the chance to play the tournament for $40, with $30 going towards live bankroll and $10 to the prize pool; the Low Roller Challenge will continue through Sunday and Monday.

AIM Services will be highlighted this day at the community outreach booth – they are a nonprofit serving Saratoga, Warren, and Washington counties with residential and community services to those with disabilities and brain injuries.

A Ketel One Party at The Post will be following the day’s final race with a DJ, trivia contests, and prizes.

Taste NY: Food and Artisans will be happening with samplings of jams, baked goods, and other items at the Saratoga Pavilion.

The community outreach booth organization will be the Backstretch Employee Service Team, a group who is committed to helping the hardworking people taking care of the horses in the barn area.

The prime race of the day will be the Saratoga Dew for 3-year-old and up New York-bred fillies and mares on the dirt for a purse of $100,000.

There will be a Saratoga beach towel giveaway with paid admission while supplies last. Season ticket plan and season pass holders will be guaranteed to receive the towel if they redeem it by 3pm.

Berkshire Bank Family Monday will be going on from 11am to 4pm at the Saratoga Pavilion, featuring kid-friendly games and activities, including an opportunity to pet a retired thoroughbred.

Mollie Wilmot Radiation Oncology Center will be featured at the community outreach booth. This is a prime cancer treatment facility dedicated to aiding cancer patients and their families.

Events and activities are subject to change at the discretion of NYRA.

Don’t forget, new this year is the Bets Squad who is available daily to teach fans about wagering. The group will be located in gazebos in the upper grandstand and outside the paddock entrance, and will also be available in the NYRA Bets Lounge on Saturdays.

If you’re new to the track and want to get more educated on how the betting system works, consider checking out the Bets Squad or scheduling a private session with them.