Habitat for Humanity of Northern Saratoga, Warren, and Washington counties will break ground for a new two-family dwelling in Saratoga Springs on October 6, 2016. 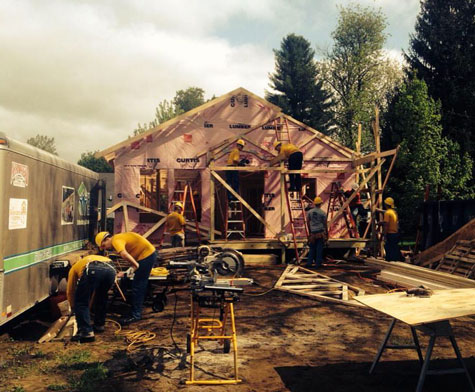 Saratoga County is both one of the richest and most expensive counties in New York state. Housing prices in the area have increased 1.7% in the past year and they are continuing to rise. The City of Saratoga Springs, the Saratoga Builders Association, Rebuilding Together Saratoga, and community volunteers are joining Habitat for Humanity in this effort to bring affordable housing to the community.

“We are pleased to go into the second half of the Saratoga Springs Workforce Housing project with so much positive momentum from the build at 195 Division Street. Adding Thrivent Financial Services to our team is a great asset. We are fortunate to have been selected for the Thrivent Builds Program, and look forward to introducing this dynamic organization to our community”, said Tammy DiCara, President of the local affiliate.

If you are unfamiliar with Habitat for Humanity, the non-profit 501C3 builds and rehabilitates simple homes for families financed with affordable, no-interest loans. Families who benefit from Habitat for Humanity’s programs pay an affordable downpayment and monthly mortgage payments in addition to “sweat equity”, the equivalent of hundreds of hours spent building their house and homes for other beneficiaries.

The community is invited to attend the groundbreaking at 26 Cherry Street at 12 pm on October 6, 2016.