Confirm business hours in advance.
Visit Saratoga.com For Everything Saratoga
Enter Giveaways Advertise
Home  »  Charity  »  Help the Homeless, Not Panhandlers, with Saratoga’s Drop Boxes
Have you seen any of the decorative boxes that started popping up downtown this summer? Next time you pass one on Broadway, drop in your spare change – all funds deposited go straight to a very important cause. 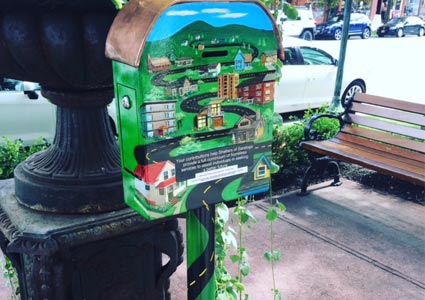 Photo provided by the Saratoga Chamber of Commerce
The drop boxes, a concept instigated by the Saratoga Chamber of Commerce, are raising money to help the homeless in our area. After panhandling grew more aggressive earlier this year, it became clear that the city needed a more effective means of ensuring donations actually provided assistance to those in need.
“If they’re getting the money in their hands directly, perhaps they’re going to buy drugs or alcohol,” Mayor Joanne Yepsen pointed out to News10 ABC. “That is not healthy and is not helpful. What we need to do is help those who need the help the most.”
All funds deposited into these decorative boxes go directly to nonprofit organizations and charities that help those in need, like Shelters of Saratoga. Shelters of Saratoga helps the homeless find steady work and affordable housing, and also provides emergency shelter and other services.
The drop boxes were purchased and installed through private donations organized by the Saratoga Springs Special Assessment District, and were painted by local artists through the Saratoga Arts Council.
According to Saratoga Chamber President Todd Shimkus, over $1,200 in personal checks, dollars, and change was collected in just the first three weeks after the boxes were installed. As we edge into the winter months, this money will be able to go towards housing and feeding the homeless when temperatures drop below freezing.
Next time you’re out and about on Broadway, perhaps going out to dinner or frequenting one of the many shops, consider dropping a dollar or two into a pretty painted box to help the homeless.
Sources: