Would you like to taste food from France, Japan, Italy, and other international countries without having to travel around the world? Head to Downtown Saratoga this Saturday, October 8th, for the 3rd annual Saratoga International Flavorfeast where you’ll be able to sample a world of flavors! 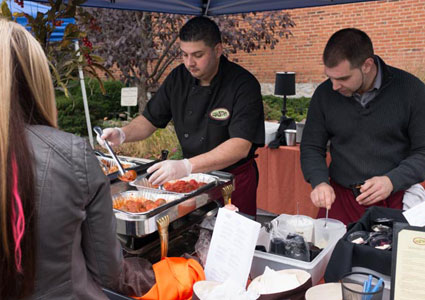 Photo provided
Saratoga International Flavorfeast is a one-day celebration of international cuisine made by local chefs. Participating restaurants and businesses will offer $1 samples of food from the country they have chosen to represent.
Even restaurants located outside the center of Downtown will be participating, offering their samples in the Saratoga Downtowner Parking Lot between Broadway and Division Street.
Aside from the samplings, you’ll be able to take trolley tours and enjoy a wide variety of cultural entertainment throughout the city. Additionally, Keeler Motor Car Company and Maserati of Albany will showcase foreign cars along Division Street.
The event will be hosted by Saratoga Food Fanatic and Network Saratoga. In a press release, Fran Dingeman, owner of Network Saratoga, said, “We are fortunate to live in a region rich in dining establishments that offer a unique blend of culinary styles.”
You can begin your international culinary journey at 11:00AM this Saturday. A free Flavorfeast “passport-map” will be available in front of Fingerpaint Marketing on the corner of Broadway and Division Street, and it will help guide you around Downtown. Flavorfeast will run from 11:00AM-4:00PM.
Check out the full list of participating restaurants and businesses below:
Get ready to enjoy some delicious international food!