Renovations will begin on the historic paddock mutuel building at the Saratoga Race Course in November 2016. The New York Racing Association, Inc (NYRA) anticipates that the work will be finished prior to the start of the 2017 racing season. 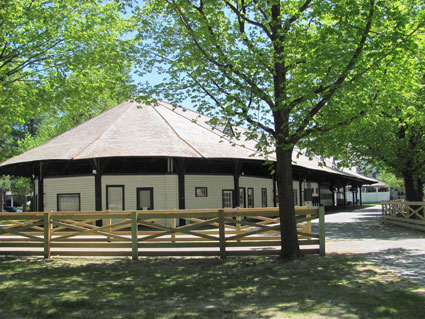 The last renovations on the mutuel barn were made in 2004. The 15,400 sq ft building is located in the center of the track grounds and was built in 1902 as a saddling shed in lieu of using the open air paddock during inclement weather. In the 1970s the building was converted to racing offices and mutuel bays and is easily recognizable thanks to a dramatic roofline with wood trusses and iron tie rods.

The renovations will include a new slate roof for the building as well as the replacement of rafters. The renovations are being done in collaboration with Frost Hurff Architects in Saratoga Springs. NYRA is still reviewing additional contractor bids for work on the project.

In a press release, NYRA CEO and President Chris Kay said: “Consistent with our commitment to our facilities and to our traditions, we have renovated several areas of the property over the last three years, as well as introducing new elements, like the Walk of Fame, Fourstardave, and Easy Goer, that provide our fans with insights into the history of this great sport and this great venue. Our efforts to renovate the mutuel barn roof are consistent with the investments we have made over the last several years, and the investments we will make in the future, to ensure that all of our guests have a great experience at the Saratoga Race Course, and are able to better appreciate the history and the tradition of this revered sporting venue.

More than $23 million has been invested in capital improvements at the race course since 2013. These improvements include the addition of the Walk of Fame, honoring and showcasing the significant contributions individuals have made to thoroughbred racing and the advancement of Saratoga Race Course. Visitors to the Saratoga Race Course over the past few years will have also noticed new hospitality areas, new high-definition video boards, stronger WiFi coverage, and an enhanced sound system.

“The historic Saddling Shed is a significant building because it is representative of the improvements made to the Saratoga Race Course at the turn of the century by the Saratoga Association under the leadership by W. C. Whitney. The Saratoga Springs Preservation Foundation is pleased with the investment that the New York Racing Association is making to preserve this important structure for future generations,” said Saratoga Springs Preservation Foundation Executive Director Samantha Bosshart in a press release.

In addition to the renovations to the mutuel barn, visitors can expect the 2017 season to bring many more modern improvements. VenueNext at Saratoga Race Course will be an all-new mobile experience for 2017 that will enhance convenience and control for visitors at Saratoga. Focusing on both preserving history and continually moving racing forward, it will be interesting to see what NYRA invests in next.