Visit Saratoga.com For Everything Saratoga
Enter Giveaways Advertise
Home  »  Business  »  The Adelphi Hotel is Now In Its Final Phase of Renovations

Have you seen the construction taking place at the Adelphi Hotel? The renovations have been going on for nearly two years, but the Adelphi Hospitality Group recently announced they’re in the final phase of reconstruction! Here’s an intimate look at what’s been happening at the hotel. 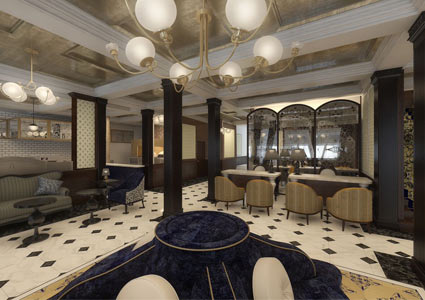 The Adelphi Hotel is a Victorian-style hotel originally built in 1877, giving it a long and significant history in Saratoga; the hotel is planning to reopen in May of 2017.

What will make the new and improved hotel so special is AHG is really paying homage to the history of the building, working to preserve the legacy of the hotel in Saratoga. The Adelphi Hotel will maintain the old world feel and beauty of its past, while incorporating the modern elements needed to allow the business to thrive and the building itself to remain intact.

Although the hotel could have simply been torn down with a fresh new building put in its in place, AHG is not satisfied with doing things the easy way. While starting from scratch would have unquestionably been easier, the integrity of the Adelphi Hotel the group is striving to preserve would have been lost.

“Starting from new would have been a fraction of the cost and a fraction of the time,” Toby Mildé told us; Mildé is President of Richbell Capital who owns both the Adelphi Hospitality Group and RBC Construction who is performing the work on the hotel.

“Anytime you’re working with an old building and you open up walls you never know what you’re going to get,” he explained. “It’s a different kind of building and it was a different kind of engineering back then. It certainly would have been easier and cheaper [to start from new] but it would not have been the same outcome. This is why we have tax credit programs, to help developers save these buildings that are worth saving.”

Representatives working to allow the state and federal historic tax credits have been monitoring every minute detail of the work going into the hotel – Mildé explained this is part of the reason why the renovations are taking so long. However, the end is soon in sight.

“Where we currently are is the real fun stuff,” Mildé said. In their final phase, AHG is working to put in floors and wall coverings, an elevator, and a staircase – they’re utilizing the banisters and anything that could be salvaged from the original staircase. “You can really get a feel for the size and layout, and how the guest rooms are going to look,” Mildé said about where the group is in the renovations now.

The front of the hotel is also being worked on, with storefronts being installed this month. The absolute final touches to be put together will include things like cutlery for the kitchen, pillow cases for the beds, and all of the other thousands of little details needed to run a first class hotel.

Mildé says what he’s most excited about with the renovations is that the building will now have a structural quality that will allow it to last for another 150 years.

“What we’ve done here is we’ve worked on and saved the last Victorian hotel of Saratoga,” he said. “It’s a special part of Saratoga. We’re very excited to open up and share this property with the public once again.”

What to Expect When Adelphi Hotel Reopens

Timeless aspects of the Adelphi Hotel will remain, not only in the physical attributes like the grand staircase and 11-foot ceilings, but also in the classic hospitality experience and luxury one would expect from an old world, first class Victorian hotel.

In addition to the hotel itself, there will also be a 1,200-square-foot, glass-walled conservatory for private dining; abundant gardens and a beautiful courtyard; an elevated bistro and marketplace that will turn into a wine bar in the evening; and a full service restaurant.

If you’re looking for a place to stay in Saratoga come springtime, you’ll absolutely want to be first in line to check out this amazing, newly restored hotel.