Do you bike for transportation or recreation in the Capital Region? Do you wish you had the opportunity to bike more?

The CDTA is currently working on a bike-sharing system to be implemented next summer – find out how this new program will work. 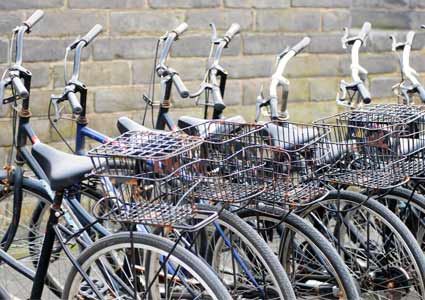 Bike-Sharing in the Capital Region

The CDTA is planning to introduce bike hubs in strategic spots in Saratoga, Albany, Troy, and Schenectady, where riders will be able to rent bikes. Users will be able to pay for a membership and rent the bikes in half-hour or hour-long time frames.

The bikes will be specialized, without chains exposed, and the pedals firmly secured to avoid tampering; they’ll also have a GPS locator.

If you don’t own a bike, the program gives you a chance to use one to get around town or simply get some exercise. If you already have a bike, this system may still be beneficial for you.

“For people who own bikes, this creates a one-way option,” Lauren Bailey, CDTA’s Mobility Manager, told the Times Union. Someone could rent a bike to go out to dinner or a movie, lock the bike up, and then catch a ride home with a friend.

Tracking units will allow riders to return the bikes to a designated hub or bike rack that is logged into the system – this is how the one-way option will work. You won’t have to necessarily return the bike to the same location you picked it up from. Of course, this system will also allow the bikes to be monitored to avoid theft.

The CDTC (Capital District Transportation Committee, separate from the CDTA), tested out a bike-sharing program in 2014 to see if this sort of system would be viable in our area.

Buffalo BikeShare was brought in to execute a pilot program, and 711 rides were reported by over 250 Capital Region residents during the one-week study – clearly, this is a program that people in our area will use.

After the study was conducted, the project was then turned over to the CDTA, which is actually fairly unusual compared to bike-sharing programs in other cities. About 70 cities in the US currently use bike-sharing systems, but most are run for profit by private companies.

“What you’ll find is new is a transit authority operating it,” Carm Basile, CDTA’s CEO, told The Troy Record.

The CDTA was chosen to operate the bike-sharing plan because of the organization’s vast experience in running regional transportation programs. Unlike the private, for-profit companies that manage most bike-sharing programs, the CDTA is considered to be a public benefit corporation – a specific type of corporation that allows for public benefit to be a significant element of the business.

Basile views the program as an extension of the CDTA’s existing transportation services.

“It’s a way for us to be committed to developing mobility options in the region,” Basile told the Times Union. “If you want to see a regional bike sharing program happen, it makes a lot more sense to have a regional entity like the CDTA (oversee it).

Will you use the bike-sharing program when it comes to our Capital Region?

In the meantime, check out other transportation services in the area!