Over 1 million people visit Saratoga Spa State Park annually to check out the historic mineral springs and explore the popular site. To help educate visitors about the park and increase accessibility throughout the year, the New York State Office of Parks, Recreation, and Historic Preservation plans to renovate an old comfort station into a multi-use Creekside Classroom by next summer! 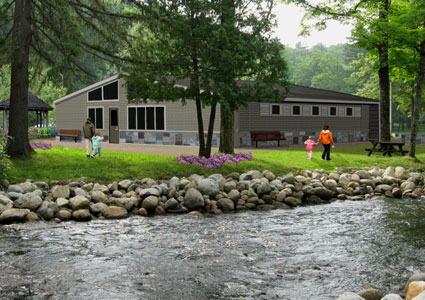 Photo: Creekside Classroom Rendering (Credit to New York State Office of Parks, Recreation, and Historic Preservation)
Plans for Saratoga Spa State Park’s upcoming Creekside Classroom project were officially presented at a recent ceremonial groundbreaking. While most of the renovations will take place within the old comfort station, the entire site is set to become a recreational and multi-purpose space.

The addition of this classroom coincides with New York State’s Connect Kids to Parks Transportation Grant Program. These grants are offered to public schools throughout New York State and allow students to take fields trips to state parks and historic sites for educational programs.

While the Creekside Classroom will host the educational programs, visitors will also have the chance to check out all of the exciting additions to that area of the park. Some of the upcoming features will include:

Not only that, but during the winter months, the plan is for the Creekside Classroom to serve a dual-purpose as a warming hut. People who take advantage of cross-country skiing in Saratoga Spa State Park will be welcomed to stop at the building.

The $664,000 park project is being funded through Gov. Cuomo’s NY Parks 2020 Program, which is a multi-year commitment by New York State to leverage millions in private and public funding for state parks.

Expect to see the Creekside Classroom open during summer 2017!