Do you have plans for New Year’s Eve yet? If not, this just may be the year you want to check out First Night in Saratoga!

Saratoga Arts has an incredible line up this year of over 70 performers in 30 venues throughout downtown Sarartoga for their 30th anniversary – get ready for music, magic, comedy, dance, kids events, and fireworks in Congress Park! 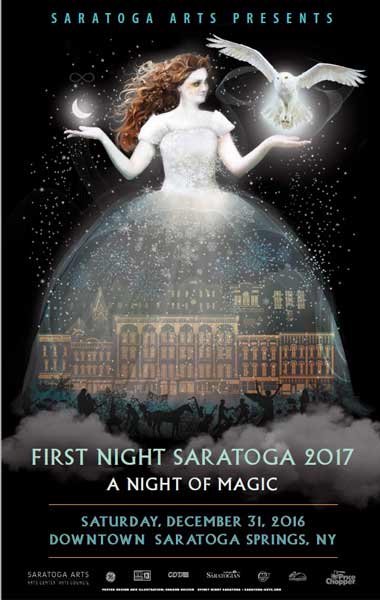 The main stage this year features an A-list of “local grown groups:”

A wide span of genres is covered – from country to rock to classical to blues to jazz and more!

Up for a 5k on New Year’s Eve? This annual run starts and ends on the Skidmore campus. The entry fee is $30, but register quickly if you’re planning to participate – this is a very popular race that closes out early, and there is no day-of registration.

Buttons cost $20 and give you access to all First Night venues and performers all night long – there is also a free CDTA bus service.

Buttons can be purchased at a number of locations listed on the Saratoga Arts website or online.

Detach the coupon on your button card and redeem it on New Year’s Eve to allow one admission for a child 12 or under to all First Night vendors. These can be redeemed at one of the following locations: Saratoga Arts, Saratoga City Center, or the Lake Avenue School (between 6pm and 9pm).

CDTA is offering a free shuttle service! Find more information about where the shuttle stops are and where you can park your car here >>

Saratoga Arts would like to encourage patrons looking for lodging for the evening to consider one of their hospitality sponsors:

Saratoga Arts is committed to making arts accessible for all in the Saratoga area through grants and education programs. They cover arts and arts education for all ages and skill levels, and all mediums – music, theater, and more.

Don’t miss out on the epic Saratoga First Night 2017!