Happy New Year, Saratoga Springs! Although 2016 was a lot of fun, it’s time to prepare for a fresh start in 2017. This weekend, there will be many opportunities for you to celebrate the new year in the Spa City, including First Night Saratoga! Take a look at what’s happening and enjoy the final weekend of 2016! 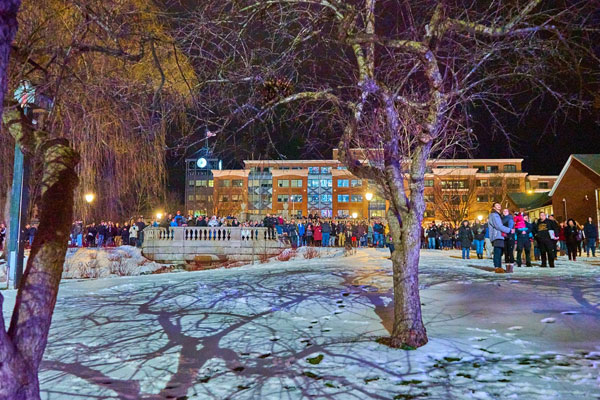 First Night Saratoga is recognized as New York’s largest New Year’s Eve celebration outside of NYC, and this year marks the 30th anniversary of the event! Purchase your First Night button for $20, and get ready to enjoy over 70 performers in 30 venues, including Holly & Evan Band and Opera Saratoga.

Head over to the Parting Glass Pub on New Year’s Eve for great Irish music by Forthlin Road and a full menu until last call. There is no cover charge for this celebration!

Vapor Night Club at the Saratoga Casino Hotel will host a New Year’s Eve celebration this Saturday starting at 8:30pm. Day-of admission is $30 per person, and the celebration will feature the New York Players and the biggest ball drop in the Capital Region!

Longfellows will host its 5th annual New Year’s Eve Bash this weekend! Reservations are required for this New Year’s Eve event, and packages include $205 per couple for an evening of cocktails, dinner, and dancing, and $405 for evening entertainment plus overnight accommodations. DJ service will be provided by Cool Cat Entertainment.

Campagna Restaurant in Malta is ready to help you ring in the new year! Featuring a special New Year’s Eve menu, you’ll be able to enjoy champagne, food, and live music as you dance the night away.

At the Nostalgia Ale House & Wine Bar in Malta, there will be a comedy show on New Year’s Eve! The comedy show will begin at 8:00pm, and then Dave Meehan will perform live starting at 10:00pm. The cost of admission is $20 per person.

The Comedy Works in Saratoga is offering a New Year’s Eve package for this weekend. For $249 per couple, you’ll be able to enjoy four hours of open bar, a delicious dinner, a hilarious comedy show, champagne, and more from 8:00pm-2:00am.

Enjoy a glass of wine while painting a picture of cardinals in the snow at Art In Mind Creative Wellness Studio’s upcoming Paint & Sip Class this Friday! The cost to attend is $35, and the class will run from 7:00pm-9:00pm.

Visit the Saratoga Winery & Tasting Room this Saturday at 7:00pm for a New Year’s Eve Wine Pairing Dinner. Each item on the five-course menu will be paired with a specific wine. The cost to attend is $65 per person, and reservations are required.