Visit Saratoga.com For Everything Saratoga
Enter Giveaways Advertise
Home  »  Community  »  Mayor Yepsen Laid Out Plan for Innovative Growth and an Inclusive Community in 2017 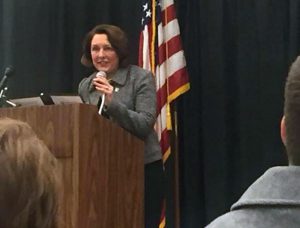 Inclusive was the word of the evening at the 2017 Saratoga Springs State of the City on Monday, January 30.

The evening began with a welcome from Deputy Mayor Meg Kelly, presentation of the colors, and the national anthem sung by the Saratoga Springs High School Choraliers. Rabbi Linda Motzkin’s heartfelt invocation touched on themes that Mayor Yepsen would come back to again and again over the course of the evening: diversity, inclusion, and the importance of community.

After a glowing introduction from Lieutenant Governor Kathy Hochul, Mayor Yepsen took the stage to begin her 2017 State of the City address. Before delving into the accomplishments of 2016 and plans for 2017, Yepsen took a moment to address the broader political context that was surely on the minds of many in the room:

“I have a thorough speech planned for you all this evening, but because of last weekend’s events in our nation, I want to just say something first. Our constitutional rights are not Republican rights. They’re not Democrat rights. They are the rights held by all Americans, and we should honor them above all else.

My fellow Saratogians, I stand here today as a mother, a daughter, a friend, a neighbor, and as your mayor to say most emphatically: the only rights that should matter to all of us are human rights. Because how we treat our fellow human beings defines our community.

I think we will all agree, no matter our political affiliation, that the larger environment with which we live is vastly different than it was four years ago. And, as the national scene swirls around us, and at times may turn us virtually upside down, I want to tell you today that I am more confident than ever that the state of Saratoga Springs is strong.”

The large – and full – meeting room received Yepsen’s words with spontaneous applause, and the joint themes of community and inclusivity ran throughout the State of the City address. Yepsen first outlined reports from the various city commissions, including Public Safety, Public Works, Accounts, and Finance. Highlights of these reports included a decrease in city grievances, an upgrade of the city’s bond rating to AA2 (Moody’s) and AA+ (S&P), no increase in taxes, the planting of 105 new trees on city property, and improvements to the city’s water and sewer systems. Lowlights encompassed issues such as the growing heroin epidemic and several incidents of hate speech, racism, and intolerance in the community.

In 2017, the mayor has a three part vision for shaping the community:

This vision includes continued commitment to many 2016 initiatives like the 23 mile Greenbelt trail, preservation of Pitney Farm, solar power development, increased funding and opportunity for the arts, and initiatives to decrease homelessness in Saratoga Springs. As part of the city’s commitment to smart development, Yepsen also outlined plans for increased transportation options for Saratoga residents, including new bus routes, a bike share program that will be open in time for track season, and a pledge to continue working on ride sharing solutions for Upstate NY.

Also in 2017, Saratoga Springs will be the host city for the first ever Equestricon, a premier horse racing convention to take place at the height of track season from August 13-15, 2017. Mayor Yepsen renewed her commitment to the reprivatization of NYRA, proper representation for Saratoga Springs on the NYRA board, and reactivation of local advisory boards. Yepsen remarked, “Our Saratoga Race Course produces the most revenue in the industry for New York state, and we deserve a voice and a strong local economy. When it comes to horse racing, what’s good for Saratoga Springs is good for New York state.”

All in all, Yepsen’s picture of the state of Saratoga Springs is positive. The city is growing and tourism was extremely healthy in 2016 with 38,000 visitors welcomed by the Visitor’s Center.

Yepsen closed her address by saying, “We are a strong city because of our history. We are a strong city because of the commitment to the balance of smart growth and open space. We are a smart city because we embrace the vitality of a livable, walkable downtown. And because we value the arts as much as education and social services. And as a result, our quality of life is the envy of other cities. The key to securing that for our next generation is to continue to act responsibly and inclusively – to keep building our community and to keep shaping our city together.”