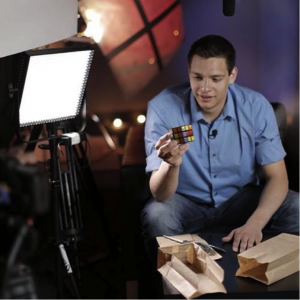 Fans of Steven Brundage’s astounding Rubik’s Cube magic can catch the Saratoga Springs magician’s latest tricks live on the TODAY Show this Wednesday, January 25 at 9:30 a.m. This will be Brundage’s first live TV appearance since he left America’s Got Talent in the fall.

Wednesday is Brundage’s first in-person appearance on the TODAY Show, though his captivating and illogically logical Rubik’s Cube magic has been featured on the show before.

Wednesday also happens to be Brundage’s birthday. When asked about how he felt about working on his birthday, the magician said, “Being on the TODAY show is an amazing opportunity, and possibly the best birthday I could have asked for. When you do something you love, it isn’t work. The chance to perform on live TV with the TODAY Show anchors and special guest John Cena is my idea of a perfect birthday.”

Brundage has been anticipating this opportunity to amaze the TODAY Show anchors and delight viewers at home by developing brand new tricks. Of course, magic tricks wouldn’t be the same without audience participation, so Brundage has plans to use a few of the anchors (he’s looking at you, Al Roker!) in his set of three Rubik’s Cube tricks. As part of his set, Brundage will be premiering two never-before-seen-on-TV tricks, one of which has never been performed for any audience.

Saratoga Springs residents may recognize Brundage from his early days performing street magic along Broadway in downtown Saratoga, while many of the nationwide TODAY Show viewers will recognize Brundage from the latest season of America’s Got Talent. Brundage left Simon Cowell and Howie Mandel nearly speechless with his logic-defying Rubik’s Cube magic during his time on the popular NBC show. Brundage was originally eliminated from the competition prior to the semifinals, but a massive outpouring of online fan support – and over 1,000 signatories on a petition to bring Brundage back to the show – convinced Cowell and Mandel to offer Brundage one of the show’s wild card spots. As this video shows, Brundage didn’t disappoint.

Since AGT, Brundage has been touring the country performing a variety of shows for small and large audiences. When he’s not performing, Brundage is hard at work perfecting new and even more unbelievable feats of magic with his Rubik’s Cubes. Brundage first garnered fame for a YouTube video showing the magician getting out of a speeding ticket using only his skill with the Rubik’s Cube. Though it doesn’t seem possible, Brundage’s Rubik’s Cube magic has only gotten more sophisticated in the past several years. The TODAY Show anchors and at-home audience won’t be able to believe their own eyes.