It’s Valentine’s Day weekend in Saratoga Springs, and there are more than a few events that will keep you and your significant other or friends entertained all weekend long. From Saratoga Winterfest to Valentine’s Day dinners, check out what’s happening and make your plans today. 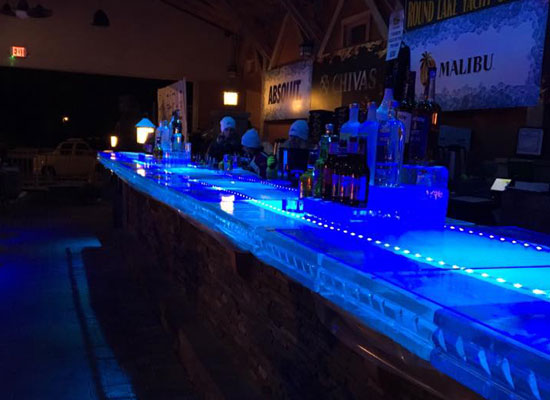 Photo: Ice Bar at The Mill on Round Lake

Come to Saratoga Spa State Park this weekend for the exciting Saratoga Frozen Springs Classic – Pond Hockey Tournament. Pond hockey games will take place all three days, so if you’re looking for something to do, stop by and watch the action.

Take a voyage to the Saratoga Springs City Center this Saturday for the 20th annual Bartenders’ Ball. This year’s theme is “Anchor’s Away,” and admission is $60 per person. For an additional $40 per person, you can also enjoy the Captain’s Lounge, which includes dedicated registration and coat check, one drink ticket, a charging station, and much more.

The popular Saratoga Fat Bike Rally is back as part of Saratoga Winterfest. Head over to the Warming Hut in Saratoga Spa State Park this Saturday for races, activities, and more fun.

It’s the second weekend of the Mill on Round Lake’s ice bar. Relax at the 30 foot ice bar, check out the ice sculpture shuffleboard, and enjoy a wide variety of drink specials, including martinis, mules, bottled beers, wines, and more.

Bailey’s Saratoga is hosting their first ever ice bar this weekend, and you won’t want to miss it. There will be drink specials from Jameson and Absolut, a Cold Spell ice luge, ice benches around fire pits, and more.

Note: All dinner specials are subject to availability. Please call the business beforehand to see if they are still accepting reservations.

Make a reservation for two at Willow’s Bistro this Friday or Saturday for a special five-course Valentine’s Day dinner. The cost is $100 per couple, and seating will be at 5:00pm and 8:00pm.

Looking to wine & dine with your significant other? The Saratoga Winery will offer a four-course dinner this Sunday from 3:00pm-9:00pm. The cost is $120 per couple, and reservations are required. If you’d like, you can make a reservation for Tuesday, February 14 instead.

On Sunday, Monday, and Tuesday, Prime at Saratoga National will offer a special three-course Valentine’s Day dinner menu for two. The cost is $225 per couple, and reservations are highly recommended.