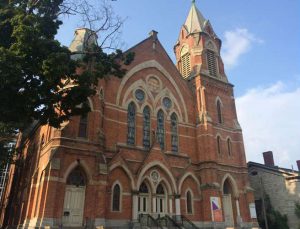 Universal Preservation Hall will undergo $5.5 million in renovations starting this June, bringing in new programming by 2018!

The historic structure was originally built in 1871 by Elbridge Boyden and is in the High Victorian Gothic style of architecture. If you haven’t been inside Universal Preservation Hall, it is absolutely stunning! Rose colored brick contrasts with light Ohio sandstone in the arches and two gorgeous walnut and ash staircases lead up to the main theater. A soaring 45 foot ceiling features Gothic arches echoed in the Tiffany-inspired windows.

A dedicated group of Saratoga Springs citizens banded together in 1999 to save the then-condemned building from being turned into a parking lot, forming a 501(c)(3) organization to transform the building into a performing arts hall, but the venue has struggled with the upkeep and renovations needed to maintain and modernize the historic building.

Now an affiliate of Proctors, Universal Preservation Hall will be investing the money to make a 750 seat entertainment venue with an elevator, kitchen, lobby, and new heating and air conditioning. Renovations will also include around $500,000 in sound and acoustic equipment alone, according to the Saratogian. Plans for the renovation will keep the historic integrity of the building, including keeping pews as seating along either side of the hall. “We’ve been working with the state historic parks and recreation department all along the way, they approve everything we’re going to do, so they’ve been partnered with us step-by-step. We know what we can do and what we can’t,” Universal Preservation Hall’s Teddy Foster told the Saratogian.

Foster first approached Proctors for help with programming or general advice several years ago, and was delighted to find out that Proctors was looking to expand their brand regionally. She told the Saratogian, “When I made the call I had no idea how serendipitous it was and they came up here they saw the building and they knew they could make it work here and we started working on negotiating an agreement to become an affiliate of [Proctors] which we did by 2015. We are really excited to have them here.”

At least six new full-time jobs will be associated with the new venue at UPH once renovations are completed. Foster says they are close to their fundraising goal, but they are still making plans for further fundraising and are accepting donations.