It looks like we have some rising stars here in Saratoga Springs! Local sister act “The Ginley Girls” got discovered on Youtube by Spurs USA singer Dona Frank-Frederico, and the group is set to make its big debut on July 1st at Caffe Lena. 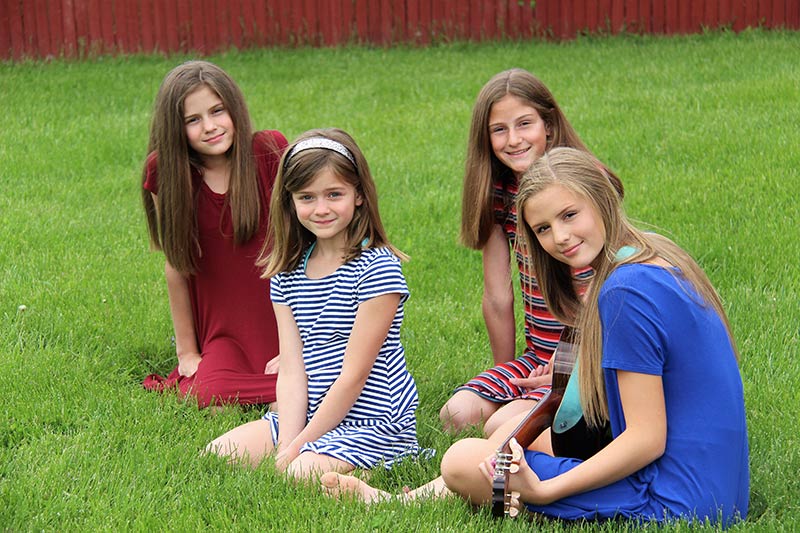 The sixteen-year-old Saratoga Springs High School sophomore can be dubbed the leader of this crew. Strumming the guitar since age eight and performing at every family gathering since, Kate has influenced her three younger sisters to follow in her footsteps.

With Kate’s kindheartedness she formed “Sisters for Smiles,” a program where the Ginley Girls offer musical visits to organizations such as the Double H Ranch and Wesley Health Care Center.

The eighth-grader at Maple Avenue Middle School is the talent show queen of her sisters. She has performed in many school talent shows with and without her siblings. Jane maintains a well rounded schedule on top of earning straight A’s. With five years of piano lessons under her belt, Jane is the pianist of the girls and is always ready to jazz it up.

Ava, age 11, is known for belting out the low notes to help the sisters harmonize. Considered the athletic one of the sisters, #3 performs on stage and on the field, playing lacrosse and field hockey since before she was in school. Miss Ava may be young, but she never falls flat when a big competition is on the line.

The chatterbox, #4, of the group makes herself well known in the Saratoga school community. Ryann, age 7, is said to rule the family with her goofy, precocious, and day brightening personality. Ryann loves to sing any time or place with her sisters

These sisters are ecstatic to be performing at Caffe Lena with Spurs USA. Join them July 1st at 8pm for a debut to remember.