Ready for the early summer festivities to begin? Saratoga Springs is prepared to kick off the season with all kinds of celebrations and fun, family-friendly events this Father’s Day Weekend. From majestic hot air balloon launches to exciting shows, we’ve got a packed weekend ahead of us in Saratoga! 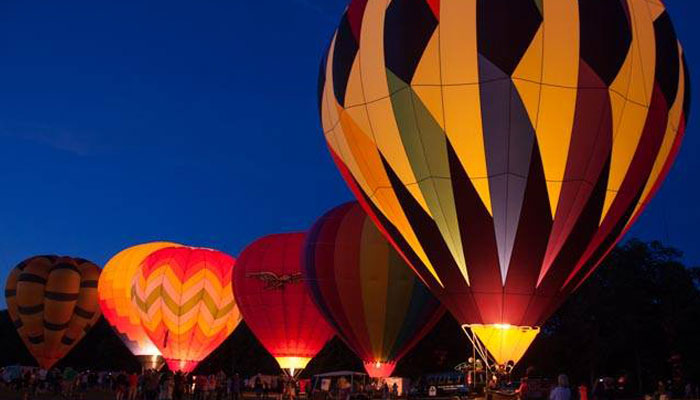 Get ready for liftoff! The popular Saratoga Balloon & Craft Festival will be launching hot air balloons at the Saratoga County Fairgrounds on Friday, Saturday, and Sunday. Throughout the weekend, the festival will also feature over 100 artists and artisans displaying and selling their original works.

End spring with a bang at the 25th annual Whipple City Festival in Greenwich! At this two-day extravaganza, families are invited to enjoy a Friday evening parade, live music, children’s activities, an artisan market, and more.

Interested in a job at the Saratoga Race Course this season? If so, then this is the weekend fair for you! Visit the Saratoga City Center for the job fair, check out which positions are available, and find the perfect summer job.

Sundae on the Farm at Kings-Ransom Farm in Schuylerville will be fun, free, and educational for the whole family. The event is scheduled to take place this Sunday from 12:00pm-4:00pm, and just some of the activities will include tours of the dairy farm, food demos by local chefs, live music, and wagon rides.

It’s going to be a party at The Saratoga Winery on Father’s Day! Dads can participate in a local craft beer tasting of four different beers for just $2. In addition, Jeff Brisbin will perform live on the deck, and there will be wood fired pizza, apps, dessert, and more available.

Treat your dad this Father’s Day to a delicious three-course dinner at The Wishing Well Restaurant. Dinner will offered from 4:00pm-9:00pm, and The Hot Club of Saratoga is scheduled to perform. Make your reservation ahead of time!

Make Father’s Day special with one of Adirondack Cruise & Charter Company’s Sunday boat rides. Cruises will be offered at 9:00am, 10:30am, 12:00pm, and 1:30pm. Dads and kids get to ride for $10pp, and the price for guests is $20pp. Enjoy a wonderful tour of Saratoga Lake!

Double M Western Store will host their first Truck & Jeep Show this Saturday from 10:00am-3:00pm in Ballston Spa. Both new and old trucks and jeeps will be featured, and trophies will be awarded to the Top 10 show vehicles. Admission is free for spectators.

From June 14-18, take the family over to the Yaddo Show Grounds in Saratoga Springs for the Skidmore College Saratoga Classic Horse Show I. This top-level competition attracts the country’s best horses and riders to the area. The second competition will be held the following week on June 21-25.

One of SPAC’s most highly anticipated concerts is going on this weekend – Dave Matthews and Tim Reynolds! There will be two performances this year, one on Friday evening and one on Saturday evening. Tickets may still be available, so be sure to check now.

To help raise money for their Student Assistance Fund, Friends of Music Saratoga Springs will host an Alumni Concert at Saratoga Springs High School this Saturday. Over 40 alumni are returning to the school to support this cause, and tickets cost $10 for adults and $5 for seniors and students.

Putnam Den, in partnership with Acquired Taste Booking, will host a benefit concert in support of Planned Parenthood this Friday night. The event will include multiple performers and some of the best comedians from the Capital Region. Performances will begin at 8:30pm on Friday and run through 1:30am on Saturday.

When it’s nice out in ‘Toga, enjoy patio dining >>