Summer’s biggest party of the season is going down in Saratoga – Travers Day at Saratoga Race Course! While this exciting racing event is set to be the highlight of the weekend, visitors in the Saratoga area will find even more entertainment to enjoy, including concerts at SPAC, car shows, and celebrations. 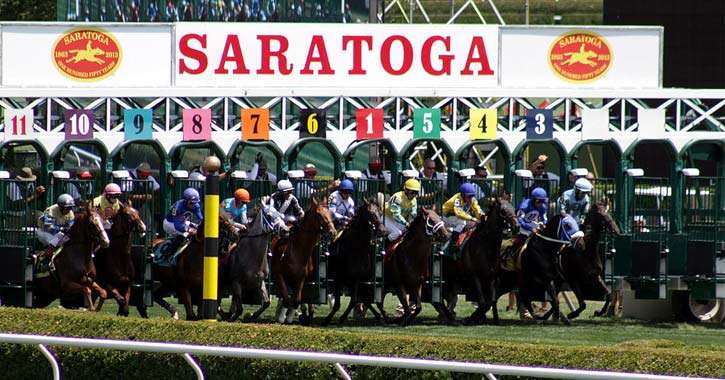 It’s time! The 148th running of the legendary Travers Stakes will take place this Saturday in Saratoga. Headlined by the $1.25 million Travers Stakes and featuring a variety of stakes races, it’s going to be a fantastic afternoon at the Track! Attendance at the Race Course is capped at 50,000.

On Travers Eve, the 19th Annual Travers Wine Tasting will take place at the Saratoga City Center from 6:00pm-10:00pm. This is one of Saratoga’s most anticipated charity events of the summer and will feature more than 100 types of wine to taste.

At the National Museum of Dance this Friday, don’t miss the 2nd Annual Taste of Travers Celebration from 6:00pm-10:00pm. Highlights include gourmet dinner stations, a cigar tasting, live music by Grand Central Station, and more. Funds raised will help support the Adult and Senior Center of Saratoga.

Want to celebrate Travers Weekend while avoiding the crowds at Saratoga Race Course? Plan on attending Kayak Shak’s TraversNotTravers Paddle Party this Saturday from 2:00pm-6:00pm. Featuring music, drinks, swimming, and laughs, it’s going to be a fun time outdoors on the water. Feel free to RSVP at 518-587-9788.

Find out more about the Travers >>

Country music superstar Luke Bryan returns to Saratoga Performing Arts Center (SPAC) this Saturday night for an exciting performance that’s sure to get you up and out of your seat. Both Brett Eldredge and Craig Campbell will be opening for him.

Get ready for the final Caffe Lena @ SPAC Concert this Sunday! Co-presented by the iconic folk venue and SPAC, this afternoon’s concert will feature Let’s Be Leonard, Sweet Megg & The Wayfarers, and Soul Inscribed. Admission is free, and the performances will take place at the Charles R. Wood Gazebo at SPAC.

Looking for a way to spend your Sunday afternoon in Saratoga? Why not take a trip to The Saratoga Winery? Visitors can enjoy live music from James Hood from 3:00pm-6:00pm, order wood-fired pizza, and sip on their 15 handcrafted wines. No cover charge!

Fun Events For the Family

Acclaimed magician Steven Brundage will be performing an array of innovative tricks at The Saratoga Hilton on Saturday and Sunday night. Renowned for his Rubik’s Cube tricks, Brundage will leave you second guessing your own eyesight with his magic routines!

Saratoga Polo Association’s 2017 summer season is winding down, so watch some matches while you can! This weekend on Friday and Sunday, you can check out the Saratoga Special Tournament at Whitney Field or adjacent fields. Admission varies based on seating.

Join the Saratoga Wilton Elks Lodge #161 for their inaugural Car Show this Saturday from 9:00am-3:00pm. Highlights of the show will include breakfast, a chicken BBQ, refreshments, music, a 50/50 raffle, and of course, classic cars, trucks, and vehicles. Proceeds will benefit veterans, youth, and drug awareness programs.

Drive over to the Saratoga Automobile Museum this Saturday for the Jaguar Car Show at 10:00am! If you’re a car enthusiast, this is your chance to see a wide variety of jaguar models in one place. Admission is free for spectators.