Wherever you go in the Saratoga Springs area, there are always fun things to do. The Race Course is bustling, Saratoga Performing Arts Center (SPAC) is celebrating the return of the Philadelphia Orchestra, and this weekend, you’ll find even more events to check out! 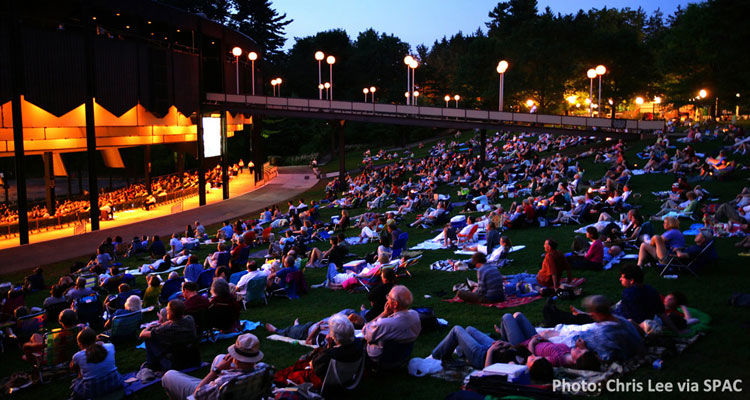 Starting Wednesday, August 2, the Philadelphia Orchestra will return to Saratoga Performing Arts Center for three weeks of mini-festivals. Celebrate the orchestra’s return and attend one of their performances on Wednesday, Thursday, Friday, or Saturday of this week.

This Saturday night, Saratoga Performing Arts Center will present “Live at the Jazz Bar,” at the Hall of Springs. From 9:30pm-11:30pm, enjoy a free jazz concert by Alta Havana! A cash bar, a menu of craft cocktails, tapas, and light dining options will be available during the event.

Saratoga Shakespeare in the Park: The Winter’s Tale – Today Through Saturday, August 5

The Saratoga Shakespeare Company’s final performances of “The Winter’s Tale” will take place at the Alfred Z. Solomon Stage in Congress Park on Wednesday, Thursday, Friday, and Saturday. Admission is free, and each performance will begin at 6:00pm.

Race Over to the Track

Prepare for an exciting day of racing at Saratoga Race Course this Saturday during Whitney Day and the Fasig-Tipton Festival of Racing! There will be multiple graded stakes throughout the afternoon, and the day will be highlighted by the Grade 1, $1.2 million Whitney, a “Win and You’re In” qualifier for the $6 million Breeders’ Cup Classic.

This Sunday has been named Jockey Days Legends Day at Saratoga Race Course. Some of the greatest riders in the history of thoroughbred racing will be at Saratoga, and autograph signings will be offered.

Big Truck Day is one of The Children’s Museum at Saratoga’s biggest fundraisers of the year. The event features trucks of all shapes and sizes for children to tour at Maple Avenue Middle School. There will also be tons of activities for the family to enjoy. Admission is $5 per child and $1 per adult. Don’t miss it!

Want to have some fun out on the water? Join Kayak Shak for a Full Moon Paddle Party this Saturday from 6:00pm-9:00pm. Kayaks and paddleboards will be available for rent for a special price, and all proceeds will be donated to the Pitney Meadows Community Farm.

Plan on watching some amazing short films at the 10th annual Ballston Spa Film Festival this Friday and Saturday. The family-friendly film festival will be held at multiple venues in Ballston Spa, including Ballston Spa High School and Old Iron Spring Park. Enjoy movies and activities throughout both evenings.

Saratoga Polo Association’s 2017 season continues this weekend with the Whitney Cup. Take a trip to Whitney Field in Greenfield Center for polo matches on Friday and Sunday starting at 5:30pm. Admission varies based on seating.