Visit Saratoga.com For Everything Saratoga
Enter Giveaways Advertise
Home  »  Events  »  Discover Spooky Fun For Everyone In Saratoga This Weekend: October 27-29

Halloween is less than a week away, which makes now a prime time to get out and enjoy some of the best and spookiest events & attractions. If you visit Saratoga Springs and the surrounding area this coming weekend, you’ll discover all kinds of Halloween entertainment that will make this season memorable. 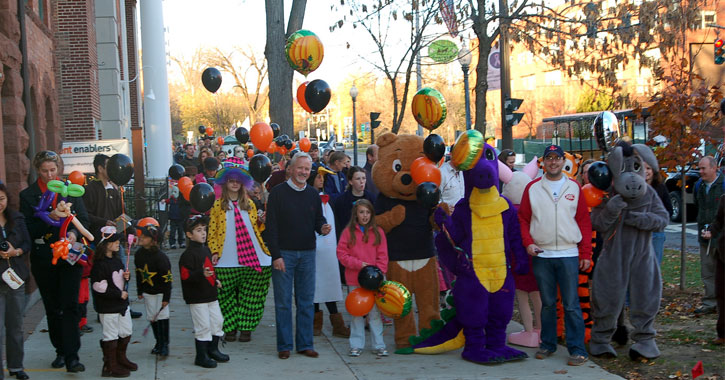 It’s time to celebrate the season in downtown Saratoga at the 16th Annual Saratoga DBA Fall Festival this Saturday from 11:00am-4:00pm. This family-friendly event will include a ton of fun activities, such as a rock climbing wall, music performances, magic shows, trick-or-treating, a costume parade, and much more.

Calling all witches! Get your broomstick and head to Ballston Spa for the 13th Annual Witch Walk on Friday. This pub crawl and fundraiser will feature great drink specials, food, entertainment, and more at local establishments.

Grab your friends and check out Saratoga Winery’s Hallo-WINE Party on Saturday at 8:00pm. There will be live party music by Funk Evolution, wood-fired pizza, a costume contest, and drinks. Admission is a $10 cover charge for the night.

One of the most unique events of fall is happening at Nemer Chrysler Jeep Dodge Ram of Saratoga this Saturday – Jeeptoberfest! This Halloween-themed event will feature a costume contest for your jeep, a trunk-or-treat, local vendors, food, a raffle, carnival games, and more.

Take a trip to the National Museum of Racing and Hall of Fame on Saturday from 10:00am-12:00pm for a Halloween Family Fun Day. Enjoy Halloween-themed craft activities for kids ages 3-10. Admission is free.

Join the Greenwich community on Sunday at 1:00pm for the annual Greater Greenwich Chamber of Commerce Halloween Parade. Children, families, and pets dressed in costumes will march along Main Street to Academy Street for judging in six categories.

Looking to get spooked this weekend? Don’t miss out on the final Double M Haunted Hayrides of the season! This year, the attractions include Walking Undead, Brutality, Last Inn, and more. Be sure to check availability now.

Plan a trip to Nightmares at Liberty Ridge Farm this Friday and Saturday and experience all of their thrilling and haunted attractions. Highlights include two haunted houses, a corn maze, an underworld tunnel, a psychic sideshow, and more.

Prepare for thrills and excitement inside the Haunted Maze at Schuyler Farms in Schuylerville! Every twist and turn in the corn maze holds a new surprise, from demons and ghouls to masked men with chainsaws. The maze is open from 5:00pm-10:00pm on Friday and Saturday, and tickets cost $14.

Enjoy the last weekend of the Ghosts in the Yaddo Garden Tours in Saratoga Springs. Experience the spirits of the gardens and feel the forces of the Earth. The tours last for about an hour and cost $10 per person (12 and under free).

Celebrate this Halloween weekend with Adirondack Cruise & Charter Co. at one of their special Ghost Ship Cruises. Head down the haunted trail to the dock and then enjoy an hour long cruise with a crew of the dead. Tickets are $20 for adults and $10 for kids.

Traditionally held the last weekend of October, the Head of the Fish Regatta in Saratoga Springs is one of the largest regattas in the country. Stop by Fish Creek and watch over 160 teams compete for some of the most unique trophies on both Friday and Saturday.

Catch Home Made Theater’s performance of “Peter and the Star Catcher” at the Spa Little Theater this weekend. This play is based on the novel by Dave Barry and Ridley Pearson, and it tells the story of how a miserable orphan became The Boy Who Would Not Grow Up.

Get ready for Halloween in Saratoga >>