We’ve reached the end of 2017, and what better place is there to celebrate the start of a New Year than Saratoga Springs? Featuring New York’s largest NYE celebration outside of NYC, the Spa City is a hotspot for all kinds of festive parties, celebrations, and events throughout New Year’s Eve weekend. Here are some of the events you can look forward to! 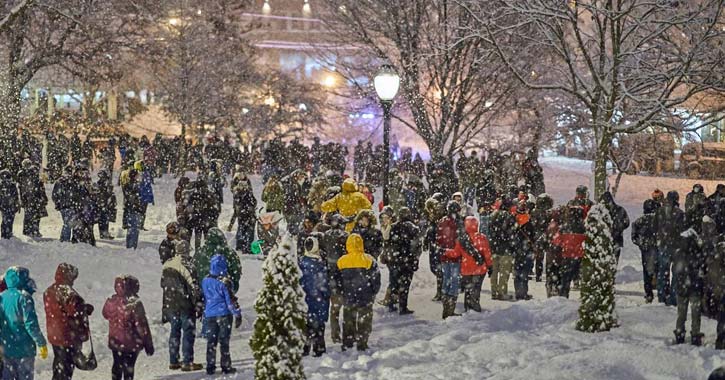 Hosted by Saratoga Arts, First Night Saratoga is recognized as New York State’s largest New Year’s Eve celebration outside of NYC, attracting roughly 15,000 people each year. This magical night will feature live music from dozens of bands, comedy performances, mind arts, dancing, the First Night 5K Run, midnight fireworks, and much more. To attend, all you need to do is purchase a First Night button.

Make your reservation for Longfellows’ 6th Annual New Year’s Eve Bash on Sunday! The celebration will include cocktails, a delicious dinner, and dancing through the night.

Join The Parting Glass on New Year’s Eve for a party with the Irish group known as Forthlin Road. There will be great music and cocktails to enjoy from 8:00pm through midnight.

Harvey’s Restaurant & Bar will host a New Year’s Eve celebration featuring live music by The Schmooze. General admission will be $5 to get on the roof.

Get ready to ring in 2018 with the New York Players at Vapor Nightclub’s annual New Year’s Eve Celebration! Did you know this party features the biggest balloon drop in the Capital Region?

For their New Year’s Eve celebration, the Saratoga Winery will offer a special Wine Pairing Dinner. The cost to attend this five course wine pairing experience is $75pp, and it will run from 7:00pm-10:00pm.

Say goodbye to 2017 at One Caroline during their New Year’s Eve event! There will be great food, drinks, and live music by The North and South Dakotas.

Have a blast at Nostalgia Ale House’s New Year’s Eve Speakeasy Party! The celebration will include “juke joint” music by Chas of Absolute Sound, a special dinner menu, and a champagne toast at midnight.

Get more details on New Year’s Eve in Saratoga >>

Take a trip to Washington Park in Albany and experience the 21st Annual Price Chopper/Market 32 Capital Lights in the Park. Drive through the park and see over 125 colorful holiday displays and scenes. Admission ranges from $20-$125 depending on the size of your car.

Looking for a fun way to spend your Friday afternoon? Bring some friends to Art in Mind Creative Wellness Studio in Glenville for a holiday painting-themed Open Art Studio, featuring their December paintings. The special price will be $12 to paint your next creation!

Enjoy sleigh rides through the snow at Lapland Lake Nordic Vacation Center in Northville on Saturday. J&D Percherons Horse Drawn Sleigh Rides will be on-site from 1:00pm-4:00pm offering sleigh rides to guests. You can register ahead of time by visiting Lapland Lake’s website or contacting them by phone.