Come one, come all to Circus Smirkus’s award-winning show! This international youth circus highlights the incredible talent of 30 young circus artists ready to dazzle and delight, and it will be in Saratoga next week for just four performances. 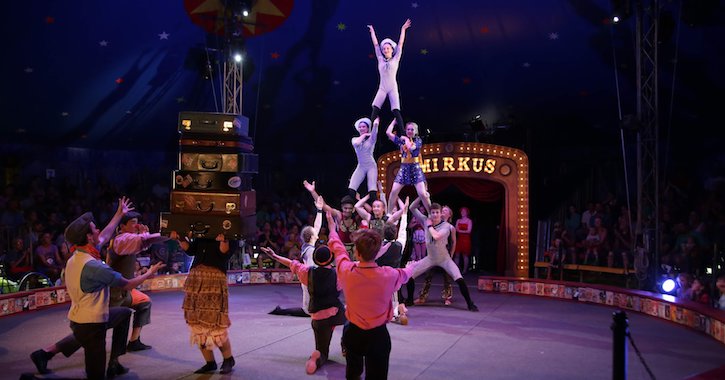 Described as “one of America’s best circuses” by Family Fun Magazine, Circus Smirkus offers a unique circus experience like none other. Circus Smirkus is one of the last circuses still held in outdoor Big Top tents, transporting audience members back to a time of the classic circus experience. The space is intentionally designed so that no audience member will ever sit more than 25 feet away from the ring, creating a total immersion experience.

This year, Circus Smirkus’s performance is based on the theme of “Vaudeville” — a spectacle of traditional variety entertainment. “Ooh” and “ahh” as young acrobats, magicians, jugglers, and wire walkers perform daring feats and overcome extraordinary obstacles.

Giving Back to the Community

Circus Smirkus is a non-profit organization committed to giving back to the community and raising up a young generation that has a love for circus culture. Since its inception, Circus Smirkus has raised over $2.5 million for its non-profit partners.

One of Circus Smirkus’ biggest outreaches in Saratoga Springs is its Magic Matinee Program, hosted by the Waldorf School of Saratoga Springs. Magic Matinee accepts corporate and individual donations to provide tickets to children who normally would not be able to attend the circus. These tickets are given free of charge and have made many children’s dreams come true.

Mark, the father of a ticket recipient through Make-a-Wish, expressed his appreciation in a press release, stating, “Thank you so much for hosting our family yesterday at the Saratoga afternoon performance of Circus Smirkus. Our son has been through so much in the last 2 years with his treatment of stage 4 neuroblastoma. We cherish every happy moment.”

You can buy tickets at the Children’s Museum at Saratoga and G. Willikers or by calling 1-877-SMIRKUS. Tickets will also be sold an hour before the show at the gates if the show is not already sold out.