Visit Saratoga.com For Everything Saratoga
Enter Giveaways Advertise
Home  »  Community  »  What Good’s a Triple Crown Without a Travers Win? Saratoga Says Only Justify Can Answer

So, Justify won the Triple Crown this year, against the odds. It’s always stunning to watch any 3-year-old as it faces down the Kentucky Derby, Preakness and Belmont — all in grueling succession.

When Justify crossed the finish line first at Belmont on June 9th, decorated horse trainer Bob Baffert’s star athlete attained equine immortality. Justify is now a horse that’s made thoroughbred history as one of only 13 Triple Crown winners. This ought to be enough for horse fans around the world. 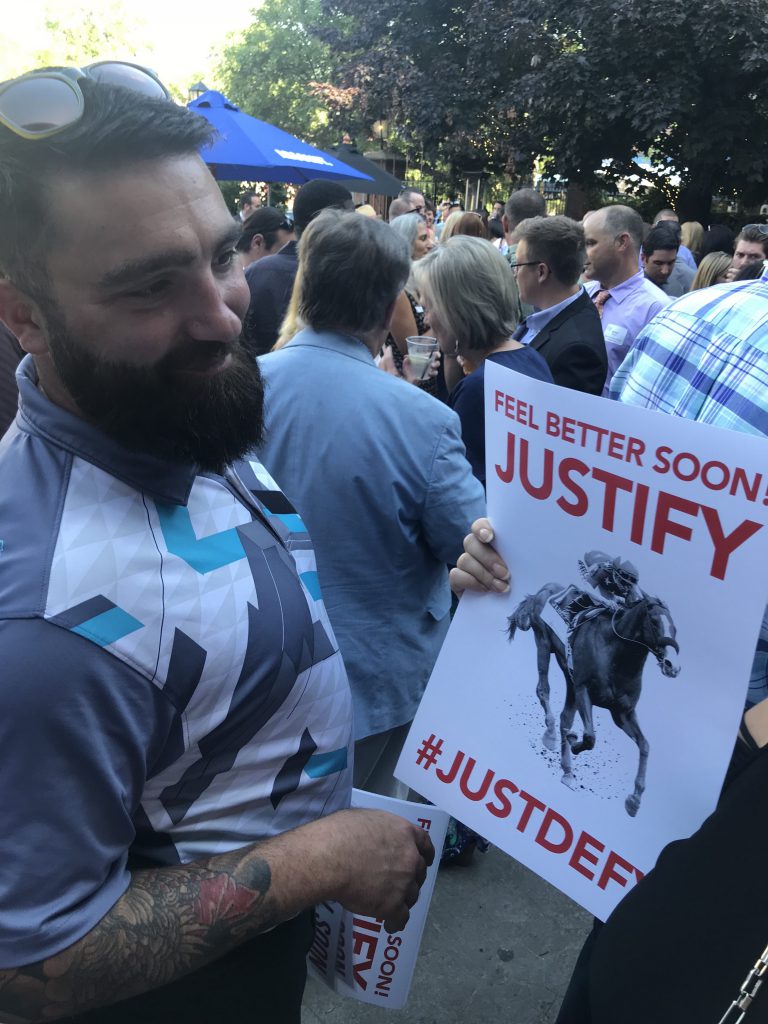 Here in this picturesque, upstate New York city, which is flourishing and humming in its own right, the desire to have Justify enter the Travers stakes race on Aug. 24 has just become an feverishly sweet obsession.

It’s not as if Saratoga is without its own laundry list of attractive merits to make the summer racing season wildly popular and profitable. Thanks to beautiful Victorian houses, Skidmore College, a vibrant downtown shopping district, a growing reputation as a retirement haven, a foodie culture and its location at the foothills of the sumptuous Adirondacks, Saratoga has long been the summer place to be.

Yet despite all of the riches savored in this upstate New York outpost, there’s now a cry for one last cherry on top. His name is Justify.

On Thursday, July 12th, a marketing campaign was launched by the Saratoga County Chamber. The scheme is called #JUSTDEFY, which is a hashtag everyone in the region ought to get used to. The launch event took place at Gaffneys, where the outdoor patio was jammed with pillars of the business, tourism and horse communities.

The term #JUSTDEFY was created by savvy marketing specialists for a city that wants Justify to defy the odds again. That would entail Baffert entering Justify in the Travers to try and become the first Triple Crown winner to win the Travers since Whirlaway did that back in 1941.

The marketing campaign comes complete with a new website, justifytotravers.com. There’s a petition to sign there, along with social media material aimed to whip up a little frenzy here ahead of the July 20 start of the Saratoga racing meet.

There were also signs and TV cameras. T-shirts are said to be coming. Saratoga County Chamber president Todd Shimkus promised there would be a lot more signs and swag and public relations around this #JUSTDEFY campaign. Longtime Saratoga track announcer Tom Durkin was there, too.

Asked why bringing Justify to Saratoga is such a big deal, the retired trackman’s blue eyes lit up with his pithy answer: “Money!”

Durkin is correct. Saratoga is the home to one of sports’ greatest venues in the world: The Saratoga Race Course. It’s such a delicious track in such a festive setting that the New York Racing Association has, over the years, extended the meet so that it is now the 6-week jewel of the New York racing season. 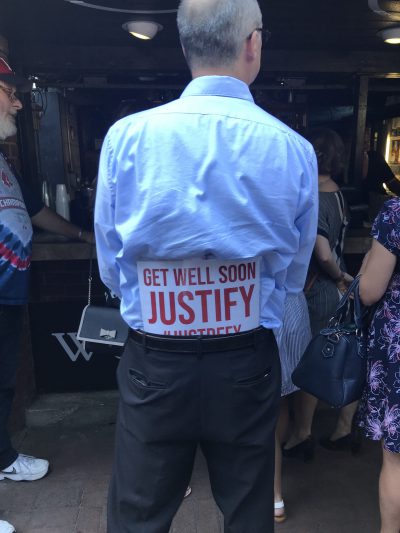 Technically, the Travers Grade 1 stakes race is not part of America’s horse racing ultimate test of greatness. However, with a $1.25 million purse, and the fact that it is contested in late August — well past the time a Triple Crown winner would need to recover from the punishing competition between the Derby and Belmont — the Travers has always been seen as the Cinderella race to the big three.

Hence the campaign in 2015 that brought American Pharoah to the Travers — which he lost, further cementing Saratoga’s reputation as the “graveyard of champions.”

Now Saratoga is trying the same tactic on Baffert and Justify.

Only there’s a new problem. Justify recently came up with an ankle injury. Baffert says there’s swelling, and he has effectively cautioned the world that Justify is not fit to compete now.

There will be no next race scheduled until Justify is 100 percent, and that includes no entry at the $1M Haskell Invitational in New Jersey on July 29.

Saratoga officials and racing enthusiasts have expressed concern that Justify’s health is the top priority. The decorated colt, which has won all six of his races this year, is being shipped back to its home barn at Santa Anita in California.

But until Baffert expressly says Justify will not contest the Travers, Saratoga is going all out to coax him to the starting gate.