Will you be coming to Saratoga Springs this weekend for horse racing? How about for concerts at SPAC? No matter your reason for visiting, you’re sure to find plenty of events and activities to keep you entertained all weekend long! 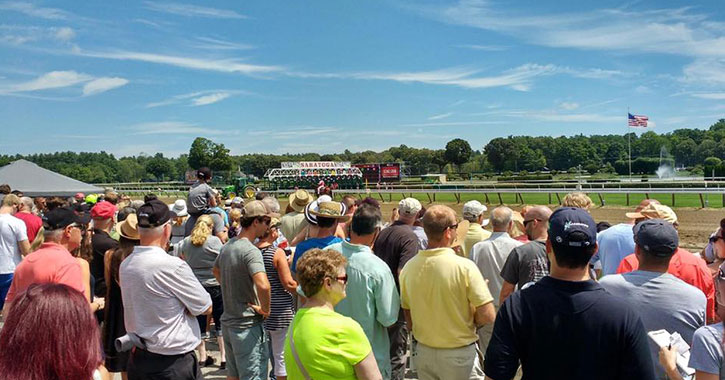 Discover Fun & Excitement at the Racetrack

The highlight of this weekend at Saratoga Race Course is the $1.2 Million Whitney Stakes! This is one of North America’s premier races for older horses on the dirt. Don’t miss the Whitney and all the other exciting stakes races on Saturday.

Want to explore a new boutique art fair? Visit the Saratoga Springs City Center for the REVEAL International Contemporary Art Fair. Thursday will be the VIP preview and celebration, and the fair will take place during the rest of the weekend.

Browse a wide selection of antiques and products at the Washington County Antique Fair and Flea Market this weekend! Over 200 dealers will be featured, so you’re sure to find something to take home.

Stop by Wilton Mall in Saratoga Springs this weekend and check out the Saratoga Summer Mall Expo. Artists, crafters, vendors, and more will be displaying their products throughout the two-day show.

Watch thrilling polo matches on both Friday and Sunday at Whitney Field in Greenfield Center! This weekend is the Whitney Cup, and matches will begin at 5:30pm.

Giddy up and head to the Double M Rodeo in Ballston Spa this Friday! The rodeo will begin at 8:00pm, but you can arrive at 6:00pm for line dancing under the pavilion.

Join the Saratoga Shakespeare Company in Congress Park for their production of Shakespeare’s play Henry IV! Admission is free, and the performance will begin at 6:00pm at the Alfred Z. Solomon Stage.

The Philadelphia Orchestra at SPAC – Multiple Dates in August

For three weeks this August, The Philadelphia Orchestra will present a summer season of music at Saratoga Performing Arts Center! For their opening weekend, there will be two concerts:

On Sunday night, country superstar Dierks Bentley will take the stage at Saratoga Performing Arts Center! He will be accompanied by special guest performers Brothers Osborne and Lanco.

Try something new at these local wineries, breweries, and distilleries >>