If you’ve been to the track over the past 25 years, you’ve heard Sam Grossman’s bugle announcing the “Call to the Post.” The unmistakable melody is about as iconic to Saratoga summers as the bugler himself. But after an incredible career ending with a final “Call to the Post” on September 3, Grossman retired from his full-time duties as NYRA’s official bugler. 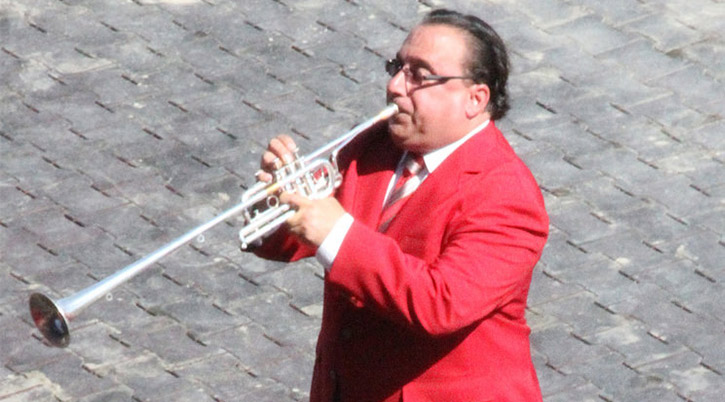 On September 3, Saratoga Race Course honored Grossman’s career. A special winner’s circle ceremony included a video tribute to Grossman, after which NYRA CEO and President Chris Kay presented him with a commemorative bugle and plaque. The fifth race of the afternoon was also named in the Saratoga celebrity’s honor.

“This has been the best time of my life,” Grossman said in a statement. “I have worked with brilliant people who humble me daily. The fans in Saratoga are the most vibrant and colorful people I’d ever want to spend a summer with and the fans in the backyard at Belmont are equally passionate about horseracing and having fun. The position of racetrack bugler has been around since the mid-1800s and I am honored to have been a part of this history. I would like to thank everyone at NYRA, and especially Chris Kay, for allowing me the honor to entertain our fans for so long.”

About Sam the Bugler

From a young age, Long Island native Sam Grossman has had a passion for music. Born into a classically-trained, musical family, Grossman began playing the trumpet at the age of six. He went on to study music at the University of Miami, where he earned bachelor’s and master’s degrees in music education. Before joining NYRA at Aqueduct Racetrack in 1993, Grossman established himself as a professional musician, playing with several bands and touring nationally.

Over his 25-year career with NYRA, Grossman’s iconic “Call to the Post” earned him Saratoga celebrity status. But it was more than his bugle-playing that made Sam “The Bugler.” In a statement NYRA said, “[Grossman] has become one of the most recognizable faces of New York racing and is a favorite amongst fans for his charisma, humor and personality.”

“Sam is a man of great musical talent who has entertained our guests for 25 years at Saratoga, Belmont Park and Aqueduct Racetrack,” said Chris Kay in a statement. “He is truly a fan favorite. While Sam is retiring from his full-time duties with NYRA, we hope to see him back here next summer at our beloved Saratoga.”

What’s next for the legendary bugler? According to NYRA, Grossman will relocate south to the Fort Lauderdale area with his wife, Laura.

Looking for things to do after racing season? Check out our Fall Guide »