Visit Saratoga.com For Everything Saratoga
Enter Giveaways Advertise
Home  »  Community  »  Be a Part of the Exceptional New Year’s Celebrations in Saratoga

Looking to make those weekend plans and get started on New Year’s festivities? We’ve got all the info you need on First Night and all the other Saratoga celebrations and weekend happenings.

First Night Saratoga isn’t just the biggest local New Year’s celebration – it’s the largest New Year’s event in the state outside of New York City. Don’t miss out on this epic event! Live music from a variety of genres and and unique entertainment takes place throughout Saratoga Springs, along with the First Night 5K.

Enjoy a fabulous four-course dinner at Salt & Char on New Year’s Eve. They’re offering two seating times, with the second including a champagne toast at midnight.

Ring in the New Year at Gideon Putnam, where festivities include a New Year’s Eve dinner, holiday drinks and cocktails with a four-hour open bar, music from Capital Disc Jockeys, and a champagne toast at midnight.

The Comedy Works is offering a full out New Year’s celebration with four hours of open bar, a delicious dinner, a hilarious comedy show with two headliners, a champagne toast, and dinner and dancing. 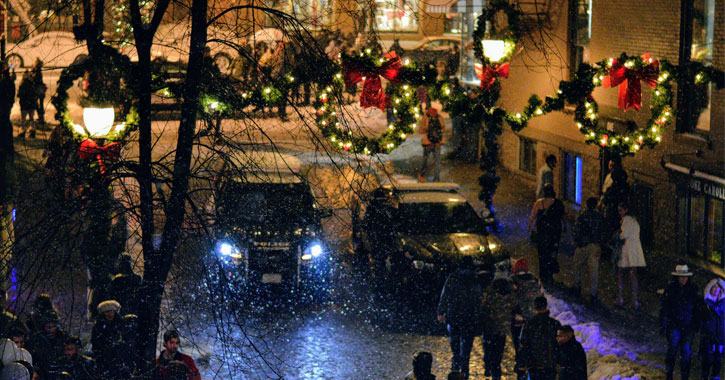 You don’t have to wait for Monday night to get in on all the fun happening in the Saratoga area! Here’s what’s taking place beforehand:

The National Museum of Racing and Hall of Fame is hosting a family-friendly celebration of Foal Patrol. Kids will get to meet a real mare and foal, take part in a coloring and craft project, check out interactive stations on horses, and more. And it’s free!

Get Up Jack at The Parting Glass

Get up and go to The Parting Glass on Saturday night to enjoy live music from Get Up Jack. The cover charge is $12 and reservations are recommended.

Michael Jerling, a local singer-songwriter who has toured nationally and has four decades of experience, will be performing at Caffe Lena. Admission is $20.

Don’t wait for New Year’s Eve to get your groove on – Vapor is hosting DJ Stantastic who will be paying all your favorite hits from the past several decades. Free admission.

The Wheel at Putnam Place

Any deadheads should head to the Putnam Place on Saturday to check out The Grateful Dead cover band The Wheel. Admission is free for those 21 and over.

The Clutch at Upstate Concert Hall

The Clutch is performing at Upstate Concert Hall in Clifton Park on Sunday along with The Messtheics, Mike Dillon Band, and Lionize.