Visit Saratoga.com For Everything Saratoga
Enter Giveaways Advertise
Home  »  Community  »  SPAC Reflects on a Successful 2018 Season & Looks Ahead to 2019

The forward-thinking Saratoga Performing Arts Center (SPAC) always puts on an amazing season of classical concerts and thrilling events, and 2018 has been no different – this isn’t considered to be a world-class performing arts venue for nothing! Read on to see what new initiatives and events were introduced this year, and what we can look forward to next. 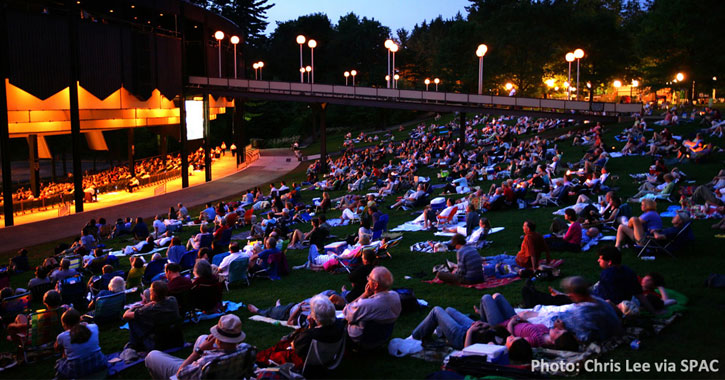 Exciting Collaborations With the Community

The success of SPAC’s 2018 season was not achieved by the performing arts venue alone. SPAC partnered up with several other Saratoga area organizations this year to really make the most of the season, and to form even more significant ties with the local community.

SPAC and other organizations enhanced a popular event this year: Bugatti Parade, which was part of the Saratoga Wine and Food Festival, resulted from a collaboration between SPAC, the Saratoga Automobile Museum, the City of Saratoga Springs, the Saratoga Convention & Tourism Bureau, and the Chamber.

The powerful sports cars progressed from Saratoga Spa State Park to Broadway, bringing out thousands of viewers to downtown Saratoga Springs. The parade was able to be enjoyed by the entire community, not just ticket-holders.

“The past several months have been focused on building new partnerships with the local business communities, while also continuing to nurture our cultural collaborations,” SPAC President and CEO Elizabeth Sobol said in a statement. “Our new Freihofer’s Jazz Fest Friday initiative with the Saratoga County Chamber and our recent ‘Bugatti Parade’ are just a few examples of our expanded vision to connect with local businesses in an effort to bring more cultural tourists to the region.”

Audience attendance at the 2018 classical season performances exceeded projected levels. They also realized the goal of bringing in new audiences with a 31% increase in first-time ticket buyers.

SPAC forged a new partnership with public radio stations WMHT in Upstate New York and WRTI in Philadelphia as part of the efforts to reach new audiences.

“Expanding upon our focus in 2017 to enhance the accessibility and affordability of the SPAC experience, this year we targeted new audiences and incentivized multiple ticket purchases,” Sobol said in a statement.

In 2018, SPAC partnered with over 90 schools and nonprofits in the area to offer free education programs, which reached over 38,000 young people through more than 165 classes, presentations, performances, and events. They also added new festivals to the roster to further enrich the classical programming.

In fact, the 2018 education programs reached 15,000 more students than in 2017. This was achieved by visiting an additional 20 schools and holding 40 more classes and events.

SPAC held its first-ever Festival of Young Artists this past June, which was a free festival celebrating the achievements of 450 young dancers, musicians, singers, poets, and visual poets of the Capital Region. Approximately 3,000 people attended this festival, and many were first-time visitors to SPAC.

Other new festivals and events included the Lewis & Ann Swyer Poet’s Corner, an Out of This World Festival, and Shakespeare in the Pines, which was described a “festival within a festival.” Shakespeare in the Pines was a one-hour musical adaptation of Romeo & Juliet, which culminated with the New York City Ballet’s performance of the Shakespeare classic, and celebrated the Bard through dance, music, and poetry.

Upgrades to New Facilities for the Future

A $1.75 million initiative to rehabilitate and upgrade SPAC’s amphitheater comes from the New York State Office of Parks Recreation and Historic Preservation. The ramps, lighting, and other aspects of the infrastructure will be revamped for the upcoming season – this is expected to be completed before the 2019 season begins.

“Thanks to our Parks partners, guests at our concerts and events in 2019 will have the opportunity to enjoy SPAC’s upgraded facilities. The pledged $1.75 million reaffirms the State of New York’s commitment to preserving our venue and infrastructure and is representative of our strengthened partnership,” Sobol said in a statement.

The Board has welcomed the following:

The SPAC Board of Directors has announced the 2019 classical season. Here’s what we can look forward to: seven performances by resident company New York City Ballet from July 16th to the 20th, 12 performances by the Philadelphia Orchestra from July 31st to August 17th, and there will be a variety of other music and dance offerings throughout the year, including the Chamber Music Society of Lincoln Center at the Spa Little Theater from August 4th to the 20th.

Get Jazzy & Celebrate the Holiday Season at SPAC

As we look back on SPAC’s 2018 successes and what’s coming up next year, let us not forget that this year isn’t quite over yet! Live at the Jazz Bar: Salsa Dancing With Alta Havana is coming up soon on November 1st, and you can look forward to The Nutcracker Tea later in the month.