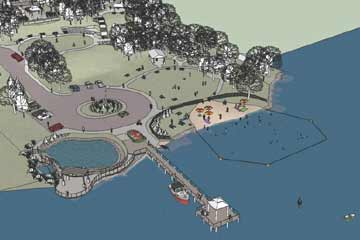 SARATOGA SPRINGS NY -- There has been much controversy over the past few weeks as to whether a portion of the city budget should be allotted to a proposed public beach project on Saratoga Lake.

In 2005, the city of Saratoga Springs used open space funding to purchase a 4.6-acre piece of waterfront property on Crescent Ave along Saratoga Lake for $2 million. The project has lain dormant for over two years with city residents paying taxes on the property with no access to the land.

When plans to redevelop the waterfront into a public park and beach entered into public discussion, it was met with animosity by those who thought the money could be better spent on other city projects. In particular, the city's need for a new public safety building (which had been scratched from the budget priority list for the next six years by the current City Council) many deemed a higher need than this public recreation project.

According to plans drawn out by the LA Group of Saratoga Springs, the original price tag on the waterfront project was $1.33 million, followed by an additional $545,000 proposed for 2010. The two-phase redevelopment plan included a fishing and boating pier, kayak and canoe launch, picnic pavilions, parking, a playground, public restrooms and a small, fenced-off beach that can accommodate up to 80 swimmers.

The council met again in a workshop meeting to find a middle ground approach to the public safety building project. They proposed a new plan to build a mixed-use building at the site of the High Rock parking lot that will include a 30,000-square-foot police station, a 15,000-square-foot court facility and public parking. A majority of the council approved the new plan, and the city has begun soliciting requests for proposals (RFPs) from investors and developers for building design and financing ideas.

The latest city budget program includes financing for both the public safety building and the waterfront project – increasing funds from the original $5.1 million to a total of $7.2 million and reducing other line items in the budget. The city will allot $700,000 toward the Crescent Avenue waterfront development (down from the original $1.3 million) and $3 million toward building the new public safety facility, which will likely increase once the council hears from the RFPs.

Other priorities in this year's city council budget program include a communications system for City Hall, improvements for the Geyser Crest well system, and $400,000 worth of funding for the design and land acquisition for an EMS facility on the city’s east side, among others.

The capital program can be amended further but must be finalized by November 30, 2008 when it is voted on as part of the city's comprehensive budget.

Photo courtesy of the LA Group