Reigning Horse Of The Year Returns To The Spa! 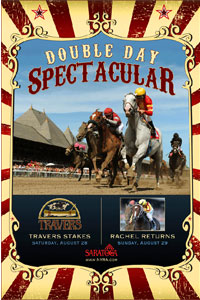 Saratoga Springs NY -- Rachel Alexandra isn't quite finished at Saratoga Race Track! The reigning Horse of the Year returns to the beloved race track on Sunday, August 29th to compete in the Grade 1 Personal Ensign Stakes.

Rachel's return for this race marks Day 2 of the first-time Double Day Spectacular. This special two-part, two-day Double is being offered by NYRA linking the Grade 1 Travers Stakes (on Saturday, August 28) with the Grade 1 Personal Ensign (on Sunday, August 29). This is the first wager offered over a period of two days at Saratoga. Learn more about betting »

If you missed Rachel's amazing debut at the Spa last summer, she packed the stands at Saratoga Race Track winning the Grade 1 Woodward Stakes on September 5, 2009. To make it even more exciting, she was the only filly in the race, triumphing over older males, bringing a new meaning to the phrase "run like a girl!"

In celebration of Rachel's return fans will receive a free commemorative "Rachel" button with paid admission on Sunday, August 29. Also available for purchase will be Rachel Alexandra merchandise, such as t-shirts, hats, and limited edition "Were You There?" autographed posters. All proceeds from these sales will benefit charity.