Join The Party And Read A Book! 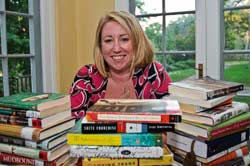 SARATOGA SPRINGS, NY - How would you like to read over 150 titles? Well, collectively, the Saratoga Reads! Selection Advisory Group did just that. Between 27 readers, they winnowed down a massive collection of books to just one. They not only took into consideration the content of the book, but also how well it would translate into discussion and community participation.

The organization does everything they can do get the entire community involved. Every year, there are also junior companion titles for each book chosen. The book will be first introduced in January 2011 at Circus Cafe in Saratoga and at Empire State College, and most of the rest of the discussions will be held at the Saratoga Springs Public Library, with occasional meetings at other local Saratoga institutions.

Saratoga Reads! was created with the straightforward goal to invite the Saratoga community to read an interesting, engaging book and talk about it; do something about it, interact with it. Something must have worked, as this is their seventh year.