There was a lot going on this weekend in Saratoga. First Chowderfest – we have the winners – and then the Super Bowl…I think the world was determined to put everyone in a food coma this weekend to get all that could be got out of the last dregs of winter (as, according to Puxatony Phil, we don’t have six more weeks of winter to look forward to).

But ok, I headed over to Chowderfest Saturday (it was my first). It was packed – people were saying it was more busy than even Travers or First Night this year. But I tried…uhm…5 chowders?  Circus Cafe, Saratoga Specialties, Hatties, Black Diamond Caterers, and the Culinary Federation. 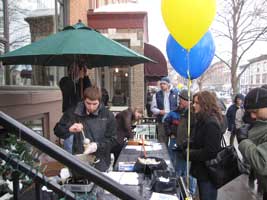 They were all great! I didn’t get to try Grey Gelding’s chowder — a lot of folks on our Facebook page were raving about it.I was having a good time just walking around snapping photos, and chatting with the guys at the EQX booth at the City Center.

What was your favorite chowder? Was your favorite one of the winners?
And then to top it all off, Super Bowl was on Sunday. Anybody who was on a diet (or rather, attempting to diet) this past weekend – I’m sorry.
As for the Super Bowl, I don’t really follow…but I heard that a team…the something bay Packers won?
…Yeah, the Green Bay Packers won the Superbowl. But a. I didn’t watch the Superbowl, and b. if I did, I’m one of those that watch it for the commercials – blasphemy, I know.
I heard that some of the best commercials were the Doritos ones (especially the one with the dog) and the Volkswagen ad with the mini-Darth.

Where did you go to enjoy the Superbowl in Saratoga? What were your favorite ads?

Photo: In front of the Wine Bar, Chowderfest in Saratoga Springs, NY.