Have you heard Megabus is coming to Saratoga in a couple months? Starting in April, Megabus, the budget-friendly bus service, will make regular stops in Saratoga Springs. This will make traveling between Saratoga and New York City / Burlington easier and more affordable! 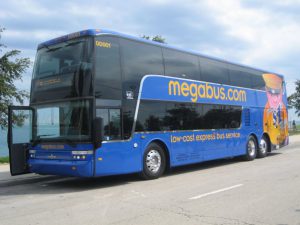 Megabus is well know for its low cost travel, with fares starting as low as $1. No that is NOT a typo, $1!

The network stretches from Canada to New York City, and will now include a daily stop in the Spa City, where travelers can head to either New York City or Burlington, Vermont from Saratoga.

Tickets are currently on sale for $4 and that price will go up as travel date gets closer (if you traveled on Megabus before you know that this is normal.)

Have you ever hitched a ride on a Megabus? How was it? I am dying to know whether or not the super cheap fare is too good to be true?